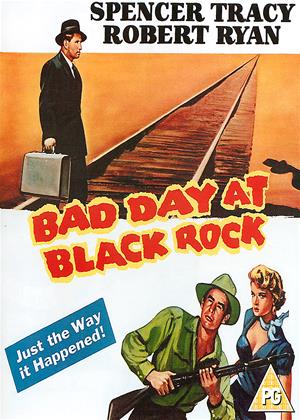 Rent other films like Bad Day at Black Rock

A gem. - Bad Day at Black Rock review by JG

An unexpectedly tough and finely filmed movie. Often looking like a Hopper painting, the same sunlit, empty locations and oblique characters. Tense throughout.

Every word counted in this brilliantly scripted and shot thriller. The sheer sparcity of the setting, the dialogue and the music made it one of the most memorable films I've seen in a long time. Also, the score (by Andre Previn?) whilst lush and orchestral, never once got in the way of the plot or action - take note contemporary film makers.

The film explodes into life as a speeding train delivers a one-armed war veteran (Spencer Tracy) to a remote one horse town to take a medal to the father of a Japanese soldier killed in WWII.  Tracy discovers this desert farmer was murdered by one of the locals and the crime and covered up by everyone else.

And the suspense never really eases off. But what makes the introduction (scored with great vigour by André Previn) so stunning is the artistic spectacle of the cinemascope which has a huge impact. And there's the gorgeous colour, which captures the epic grandeur of the Mojave Desert and its big white sky.

The film is set in 1946 and seeks rapprochement for the victimisation of Japanese citizens in America after Pearl Harbour. It warns of the consequences of hate. A man was violently killed for his race. And the one-armed army veteran is next. No stranger was ever made to feel less welcome.

Spencer Tracy leads effectively, but the film is carried by its all time great supporting cast of western rednecks: Robert Ryan, Ernest Borgnine, Lee Marvin, Walter Brennan. The atmosphere of threat is very potent. We empathise  so completely with Tracy's outsider/victim that it makes the anti-racism of the story's message extremely powerful.

Spencer Tracy is having a bad day at Black Rock. One-armed and suited, he strikes a remarkable figure against the tumbling Californian plains – there is something in him of David Bowie's gentle alien, wandering across Nick Roeg's New Mexico, or Caspar David Friedrich's solitary figures. Local townies show immediate resistance to his arrival, and when his mysterious purpose is finally made known, they taken an offensive. These are people caught up in the rush of their resentments and prejudices, liable to tyranny in their old-world rule. Tracy's investigator embodies the coming of modernity in this dusty place; his acting, likewise, is also far more naturalistic than the locals' pantomime. Slow and fascinating to behold.

Classic and superb mystery thriller set in a small desert town in 1945 just after the Second World War has ended. The small population are overawed when the train stops at their station for the first time in four years and a stranger gets off. This is John Macreedy (Spencer Tracy), a veteran of the war where he lost an arm. He is baffled by the hostile and suspicious reception he receives from the locals. But they have a dark secret and Macreedy's reason for being there goes to the heart of it. This is a contemporary western and it follows a very common narrative arc often found in film and literature of a stranger who arrives to disrupt the calm of a place and unravels a sinister underbelly of corruption. There are also strong themes of racism, greed and bullying here and the film gets to the heart of when ordinary people turn a blind eye to a heinous crime. This is a brilliant and tense drama with a great cast that also includes Robert Ryan, who made a career out of playing bad guys, Anne Francis, Lee Marvin and Ernest Borgnine. A topnotch film and one to seek out if you've never seen it.