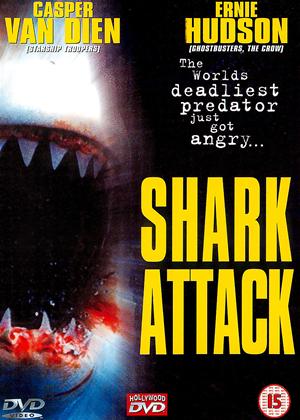 Synopsis:
Since the dawn of mankind no predator has thrived and killed with such indiscriminate contempt as the all powerful Shark.
When an accidental death verdict is given on discovery of the remains of a top scientist, within the stomach of a hammerhead shark his closest friend Marine Biologist Steven Mc Ray (Casper Van Dien) is not happy with the explanation and travels to investigate further, where he discovers that his friend's death was not an isolated incident, and that the local population have been terrorised by a rash of shark attacks.
Developments in scientific technology had allowed experts to predict the pattern and likelihood of Shark Attacks, but now it seems that they may also be able to actually control these factors, rendering at their disposal the ultimate Killing machine. Enjoy the water... You may never mat to go in the sea again!
Actors:
Cordell McQueen, Casper Van Dien, Chris Olley, Jacob Makgoba, Paul Ditchfield, Shelley Meskin, Candice Berman, Bentley Mitchum, Simo Magwase, Willie, Ernie Hudson, Anton Dekker, Tony Caprari, Dave Ridley, Jenny McShane
Directors:
Bob Misiorowski
Producers:
Mandy Branch
Writers:
Scott Devine, William Hooke
Studio:
Hollywood DVD
Genres:
Horror

Casper Van Dien's had a disappointing career, but most of his films after Starship Troopers seem to suggest why; - while the more established actors were acting hammy and over-earnest to fit the satirical tone, that was Van Dien at the top of his game. Here he brings more of the same as a scientist who's up against diabolical bad guys (with evil laughs), angry natives and a rash of mystery shark attacks. The fishermen are angry, there's a mysterious scientific facility that everyone wants to blame, and Van Dien has to unravel the mystery and save the day.

Unfortunately, as this is a cheap movie with a lazy plot, that means lots of pointless conversations loaded with pseudo science in cheap concrete labs, mystery thugs chasing people, blonde scientist women frowning into microscopes, and narrow escapes from angry fish. Make no mistake, the plot and the dialogue only exist as an excuse for a few near-miss shark attacks. Much as I wanted this to be good, it's clear that when Van Dien and his co-stars are being chased by sharks, the beasts are the smartest thing in the water. This feels the same quality level as a cheap Central-European-filmed Seagal movie, and even the shark attacks are poor, with low tension and a mixture of quality levels in the footage and effects.

Utterly predictable and as exciting as an over 60's yoga session.