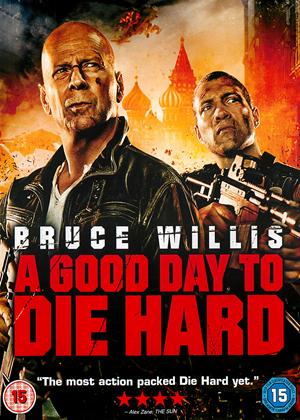 Rent other films like A Good Day to Die Hard

Reviews of A Good Day to Die Hard

A Good Day to Die Hard comes from the mind of John Moore, the man behind Max Payne and the remake of the Omen, two films which lacked not only any kind of entertainment factor but also common sense. Unfortunately A Good Day to Die Hard continues this trend and the fifth instalment in the wildly popular Die Hard franchise is a tragic attempt at action film making.

The film follows John McClane (Bruce Willis) as he heads to Russia to find his son Jack (Jai Courtney) but gets wrapped up in a conspiracy that could threaten millions of lives. You can tell within 10 minutes of Die Hard 5 that a lot of thought has gone into the way the action is being displayed but Moore is so married to head ache inducing shaky cam that the action is hard to tolerate.

The dialogue is woeful and makes what used to be a mildly funny New Jersey resident into a humourless sociopath. The other Die Hard films were clever in the ways they limited the number of enemies John had to face so as to humanise him. In this he may as well be The Terminator as he mows down crowd after crowd of imbecilic bad guys as if its some kind of sport and survives things that would kill any ordinary man. The film is so excessively action orientated there are about 3 scenes that don't break out in gunfire. For a Bruce Willis fan this is really hard to take, though the previous instalment in the franchise wasn’t as good as the originals this is far cry from the Die Hard’s I know and love.

The film tries to be clever in its plotting but the final act is so hilariously over the top you have to just laugh as writer Skip Woods tries to bring the film back to some kind of normalcy but realises this film was never normal in the first place. The people the McClanes go up against are stereotypical villains that even pale in comparison to Timothy Olyphant's villain from the previous instalment. It's a tragic addition to the Die Hard saga, if not only for the simple reason that the film's main villain barks like a dog at one point as if it’s the universal handshake for villains.