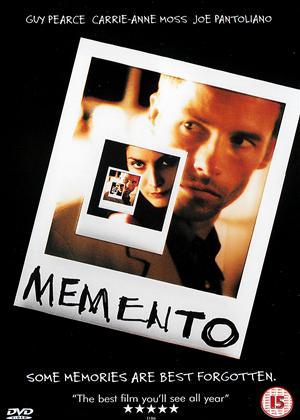 Synopsis:
From director Christopher Nolan, a unique and intriguing thriller that begins with the ultimate act of revenge and backtracks through time to reveal the shocking and provocative reasons behind it. Leonard Shelby (Guy Pearce) remembers everything up to the night his wife was brutally raped and murdered. But since that tragedy, he has suffered from short-term memory loss and cannot recall any event, the places he has just visited or anyone he has met just minutes before. Determined to find out why his wife was killed, the only way he can store evidence is on scraps of paper, by taking Polaroid photos and tattooing vital clues on his body.
Throughout his investigation, he appears to have the help of both bartender Natalie (Carrie-Anne Moss), who may have her own secret agenda and police officer Teddy (Joe Pantoliano) whose friendship is always suspect. As Shelby's fractured memory tries to piece together a chilling jigsaw of deceit and betrayal in reverse, breathtaking twists and surprising turns rapidly occur in the most challenging, original and critically acclaimed thriller in years.
Actors:
Guy Pearce, Carrie-Anne Moss, Joe Pantoliano, Mark Boone Junior, Russ Fega, Jorja Fox, Stephen Tobolowsky, Harriet Sansom Harris, Thomas Lennon, Callum Rennie, Kimberly Campbell, Marianne Muellerleile, Larry Holden, Buzz Visconti
Directors:
Christopher Nolan
Writers:
Christopher Nolan, Jonathan Nolan
Others:
Dody Dorn
Studio:
Pathe
Genres:
Drama, Thrillers
Awards:

This film is intriguing. Its appeal lies in the way it challenges the viewer to work out what has happened - in reverse. Guy Pearce convincingly plays a man with short-term memory loss and conveys the sense of confusion and terror that goes with his condition. Whether the film raises more questions that it answers is something that the viewer will have to ask him/herself at the end, but overall I enjoyed it.

Christopher Nolan has been lauded for this direction in which every scene precedes the previous one. Stepping backwards towards the beginning in such a way as to reveal more. The credit however must surely go almost entirely to his brother Jonathan who wrote it. Guy Pearce is fantastic. The subtlety of portraying a man with no memory is done perfectly. The end of the film (the beginning of the plot) was a bit of a let down, neither satisfying nor believable. For the film connoisseur, a must.

Written up as very clever film, but is just a bit odd. Odd not necessarily clever. No twists at end to redeem it. Well acted though for sure. Not Guy letting things down. Just misses the mark. Could have been loads better...........

A most fascinating piece of cinema - Memento review by Cato

An incredibly clever film which told the story backwards from its conclusion. I've never come across a film like it. Every quarter of an hour the story went back until at the end we arrive at the reason for the man's behaviour and explains why the main character was in such a state. Highly recommended.

Should have looked at Wikipedia first - Memento review by AB

Intriguing film but a bit confusing at times - trying to work out what *actually* happened, I turned to Wikipedia where it told me that there were two timelines in play - one in black and white and the other in colour (backwards and forwards). The film might have held it together for me a bit better if I had known that before watching it.

Memento is Christopher Nolan’s best film to date, and anyone who says otherwise is dead wrong. This film utilizes retroactive storytelling to its extreme but still manages to make the plot as clear as a bright summer sky so that audiences don’t get lost in the process of it all. To this extent, Memento is an incredulous, ingenious, and a somewhat “twisted” take on how our brains can fool us without us even knowing; more importantly however is the story, which surprisingly enough, all of it plays out (or unravels) in the main character’s head. The viewer knows exactly as much as Leonard (Guy Pearce’s best role to date), and this is precisely why Memento is so mesmerizing to watch: it creates a shroud of mystery that stays with you long after the credits roll.

Stripped down to its core, Memento is a very simple film about a man who gets knocked on the head after some unknown perpetrator abuses (and possibly kills?) his wife. This Leonard man then suffers from some kind of short-term amnesia that affects his memories up to the previous day, i.e. he remembers all the major events of his life (his memory is deeply flawed however), but is quick to forget what was going on the day before. Therefore, he conjures up a plan to note everything, record everything, and tattoo himself with the most important clues in order to achieve his goal: find and eliminate his wife’s killer. Sounds simple enough, right?

Well, yes and no. See, Leonard is plagued by old guilt he thinks he’s directly responsible for, but as things go forward, that may not be the case. Christopher Nolan does a great job (actually, a genius job) of covering Leonard’s tracks and muddling his traces just enough so that the audience stays engaged all throughout the film’s runtime. Also, there are few shady characters that hover in and around Leonard and nudge him into several divergent directions; there is the potentially crooked Teddy (Joe Pantoliano in probably the best role of his career) that acts as a helper to Leonard but has a hidden agenda that nobody knows about; also Natalie (Carrie-Anne Moss) whose whereabouts are constantly changing and evolving: what is her relationship with Leonard anyway and what does she want from him? The audience is as clueless as Leonard, which makes for an excellent watch even when you know how the film will ultimately end.

Finally, Memento’s themes intertwine on several layers which I’ll not dare to spoil here (for those of you who were hiding under a rock the entirety of the last 18+ years or so); Memento has to be seen to be believed, and what better time to see this magnificent offering than right about now?