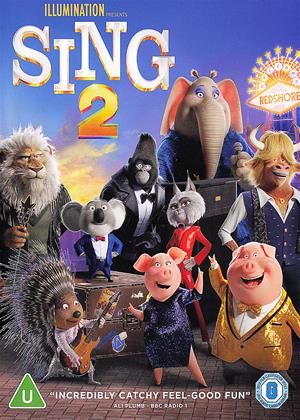 The sequel to Sing adds little. Well, that might not be completely accurate. The film does add a lot more songs, characters, and lavish animated set pieces. What it lacks, sadly, is a better balance of characters. All the same problems remain from the previous picture. There is simply too much going on, too much music, and too much frenetic energy to ever appreciate any of the half-dozen characters crowding the screen.

Buster Moon (Matthew McConaughey) is still very much the underdog of the koala trying to keep his theater afloat. He succeeds and everything is looking good for his singing troupe. But now there’s a new goal in mind. He wants to take his career to the highest heights by bringing it to the city for a larger venue that’ll please a bigger producer. He becomes inspired to do so when being told he’s not good enough for the big leagues. Naturally, he aims to prove all the naysayers wrong with a trip to the city and misfit adventure to prove themselves.

To make this show happen, Buster tries to sell his big musical ideas to media mogul Jimmy Crystal (Bobby Cannavale), a rich and powerful guy with a greedy worldview. He turns down numerous acts at the drop of a hat and only agrees to make Buster’s show happen if he can promise the show will feature Clay Calloway (Bono). Clay was a big name but now would rather stay out of the spotlight as he deals with the death of his wife.

If the story specifically centered around trying to convince Clay to get back into the music game and learn from his tragedy, that’d be a heartfelt animated picture. And it would’ve been if the film didn’t have to balance a slew of other characters in more watered-down arcs. The pig Rosita (Reese Witherspoon) has stage fright when it comes to heights. The gorilla Johnny (Taron Egerton) needs to learn fight choreography but fears he’s not good enough amid a strict teacher. The elephant Meena (Tori Kelly) needs to figure out how to navigate a romantic duet when she finds her shy self unable to embrace a romantic angle. And that’s not even counting the issues of Buster, Gunter, Ash, and a host of contributing characters with conflicting views on showbiz.

Further crowding the picture are the musical numbers. Pop and classic rock bloat the picture with musical sequence after musical sequence. Sometimes it’s just background music with the hijinks in the city. Other times they’re lavish displays of the grand vision for a sci-fi rock opera. I’ve neglected to count but I’m willing to bet there are far more songs in this sequel than there were in the first film, especially since there’s one scene where it feels as though seven songs are rushed through in the course of a minute.

This is such a frustrating film because technically, the film looks great. The character designs are all varied and a pleasure to observe. The locations and sets for the musical are gorgeous with some creative touches of using characters for lighting and confetti for aliens. The scale and scope all look good. It’d be nice if you could actually feel something more than a mere toe-tapping during these sequences, where Rosita's ascent into flying across the stage carries more weight than just being the quick and obvious resolve.

If Sing 1 did nothing for you, Sing 2 will equally disappoint. The improvements are minor, where the script is more intriguing than the tired trope of saving a theater. But what little it improves upon, it only amps up the unfocused nature of this bog-standard jukebox musical, even if that genre isn’t as common for animation.