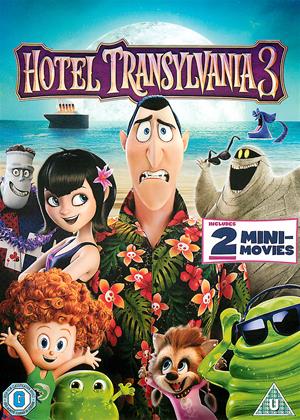 As much as I loved the first two films, this one was such a letdown. Everything was so overdone - every move, every gesture, every facial expression - way too vigorous. And jokes were not funny. Pity.

A joy to watch - Hotel Transylvania 3 review by JT

A joy to watch - superb animation and delicious characters made this a winner for me. I watch this, of course, as an adult, but find it as entertaining as if I was watching as a 6 year old (possibly even more so). All thanks to the clever people who make these!

While it is nice to see animation director Genndy Tartakovsky once more returning to feature direction but what more can he possibly bring to Hotel Transylvania? I get the feeling that he more than anything just wanted to cut loose and take it easy with a film better built for gags than weaving a more compelling tale of monsters. Sure, there’s a new angle with the old Count Dracula (Adam Sandler) needing to find a new wife but that’s little more than an excuse to weave more monster related visual gags and puns. And Genndy certainly has the best style when it comes to staging comedy, his easy-going approach of a Summer Vacation style sequel still made me long for the greater Genndy we’ve seen from the likes of his Samurai Jack revival.

As I stated, the premise is a loose one even with all its bells and whistles that are pretty much repeating the past assembly of the sequel. On the family side of the story, you have Dracula being so overworked and stressed that his daughter Mavis decides to throw him, and the whole hotel, a vacation of a boat cruise to (where else?) the Bermuda Triangle. Drac is quick to point out how little of a change this is, that the cruise features all luxuries of the hotel but now on the water. He continuously brings this up to be a grump but he still raises a good point. So few gags take full advantage of the cruise environment that could be done at the hotel, including a pool sequence.

On the action side, because it isn’t enough conflict that Drac can’t find a date, we have the evil Van Helsing (Jim Gaffigan), sworn to kill not only Dracula but all monsters. He has been at it for so long that he now preserves his body in a hideous contraptions with all sorts of engines and dials to keep him alive like a motorized Jack in the Box. Naturally, his latest scheme involves the boat cruise, where his daughter Ericka (Kathryn Hahn) assumes the disguise of a captain to complete her father’s revenge. Of course, Dracula quickly falls for this woman and why wouldn’t he? Genndy has designed her in that trademark attractive woman design of curly short hair, big eyes, and a small nose. And, of course, Ericka uses this to get closer to killing Dracula. And, of course, she’ll end up falling for him anyway. Big whoop.

There’s a decent handful of gags but they all pretty much come as ordered and with little development. The little kids of Mavis’s son Dennis and his werewolf girlfriend Winnie have some fun trying to sneak their oversized puppy into various no-pets-allowed spots on the boat. The disguise of the dog wearing a trenchcoat and being able to speak perfect English is cute the first time, dreary the second, and tiring the third. Drac’s dad (Mel Brooks) also joins the cruise to make some dirty jokes and show off his robustly flexible frame for the elderly witches seeking a peek. Probably the most relatable bit for adults will be the werewolf couple (Steve Buscemi and Molly Shannon) who find themselves with unexpected freedom when there’s a daycare willing to take their litter of children. Cute, but also awkward when they later admit they spent most of the cruise tranquilized in a dark room for hours, gleeful to do it again.

And it just wouldn’t be a passively animated film properly distanced from the adult crowd if there weren’t a dated and embarrassing dance sequence to close out the picture. I thought back to the first picture and how there were actually some original songs that made this obligatory cliche seem a little more thoughtful. There’s no such luck with Hotel Transylvania 3, resorting to the absurdly dated and lame sequence of everyone doing the Macarena. Was this meant to be a joke for the adults? As if to say, remember when we all did this stupid dance? Yeah, it was stupid and not exactly a fond memory of the 1990s. The resort to this old number just goes to show that Hotel Transylvania may still have lots of jokes about skeletons, vampires, witches, and gremlins, but their bag of tricks is running low to reach this far back into the past for absurdity. Having all the characters deliver the floss dance from Fortnite would be far more fitting and much less cringey. At least the kids of today can look back on that fad with the same regret I have for the Macarena.