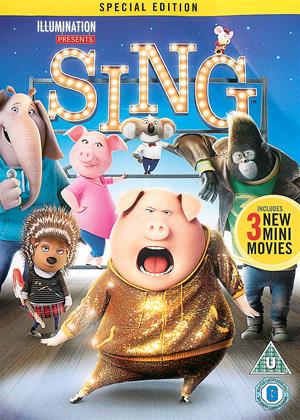 Why, what was the point? - Sing review by CS

This has got to be the most boring film I have seen so far this year! I usually enjoy cartoon films as they can be quite funny and good fun to watch. But this film had none of the ups and downs, comedy, character development or life usually present in this genre! Basically this film is nothing more than one of those dull music talent shows awash on tv at the moment, in cartoon form, with animals taking the place of humans! I struggled to watch this and had to view it in three instalments to get through it, as it literally sent me to sleep! There's nothing funny, amusing, exciting in here for me and there is a distinct lack of character development, emotion or humour! In fact looking at the bonus features, there are three mini shorts, which are far funnier and much more entertaining than the actual film itself! It seems that whoever made this film was desperately trying to create a blockbuster, but for me this falls flat on it's face!

Kids be up for it - Sing review by NC

Similar to Zootropolis but not as clever. Lots of folks getting some money for odd little voice overs, so prob not as cheap film as would think?

I enjoyed this due to the anthropomorphic characterisation of the animals in the film - tune were pretty dire but it is a feel-good film about getting things done and getting them right. Who needs character development in a cartoon? It is simply a drawn version of a 'feel good' storyline that humans act in.

Illumination Entertainment seems to be a studio better built for shorts than feature-length animated films. Much like their recent effort of The Secret Life of Pets, Sing begins with the concept of a simple gag: What if CGI animals sang licensed music? It’s the movie’s greatest strength as the animators are given great music with solid voice actors to sing them and plenty of creative room to make the animation fun. The animators have done a swell job in this department. It’s the writers that are in trouble as they have the tougher job of trying to sell narrative and character amid the musical sequences.

This is a very crowded animated picture that doesn’t give us much of any time to get to know these characters or sympathize with their situations. Buster Moon (Matthew McConaughey) is a plucky little koala struggling to keep his theater afloat, but exists in limbo as a likable character I couldn’t care about for his father’s legacy or his sneakiness in neglecting to pay others. He decides to raise money and awareness for his theater by hosting a singing competition with a cash prize. Where did the idea come from? No time for that question as the movie has to whip away to the singing gorilla Johnny (Taron Egerton) that wants to sing more than follow in his father’s footsteps of crime. Perhaps a parallel tale with Buster? No time for that either! Now we have a pig (Reese Witherspoon) that wants to break out from being a typical mom. Now a shy elephant singer! Now an angsty porcupine recovering from a breakup! Now a sleazy jazz-singing rodent! Now a German pig dancer! Now Japanese dog singers! Now light-up squids!

Are you exhausted yet? The director must be aware of how weak this story is as the movie will do everything in its power to race towards the inevitable ending of song and dance. To be fair, this is where the movie shines most. When Taron Egerton belts his sweet cockney voice against piano, it’s entertaining. But when the movie doesn’t take enough time to display his plight for shoving aside his dad’s life of crime, it’s a little hard to feel the emotion behind that performance. It’s hard to say if his plot would have played out better if it wasn’t lost in the shuffle of the nine other plots in play.

The movie is in such a rush that several elements are skirted over to get to the music. The pig mother needs to attend rehearsals, but can’t find a babysitter. Her solution? Concoct an engineering masterpiece of automated machines and pulleys that can make the kids breakfast and send them off to school. Was there an engineering degree lying around she didn’t mention? The other character who seems to have the least time for development is the shy elephant who is so uninteresting her arc mostly involves her directly saying that she is shy. Of course, the movie wants us to love her for hiding such a beautiful voice, but after hearing her straining version of Leonard Cohen’s “Hallelujah”, I think it might have been better if she remained a stagehand.

Sing has enough song and dance numbers to keep the kids entertained, but its juggling of multiple characters and storylines to get to these sequences makes the movie much less enjoyable for adults. Most animated films want to work for that song and dance number to end the picture that at this point has become almost obligatory with animated films. Sing doesn’t want to put in the effort to make this movie either a unique perspective on theater life or a consistent musical, falling somewhere in the middle as a film that will only be cute and nothing more. For a studio that is quickly rising up among the ranks of Pixar and Dreamworks, their formula is becoming far more apparent and the laziness all the more annoying as the babble of minions.