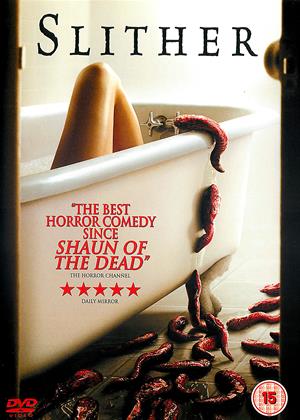 I love horror films and comedy films and often when the two are mixed it makes for great viewing, i.e the "Scream" trilogy,"Boy Eats Girl". However something went very wrong when they made this film! Its not horror at all, ok maybe it is but very very mild and I didnt laugh or even smile once. And in places this film is darn right stupid, with trashy effects. My advice would be don't bother.

This is a whole heap of grotesque fun, if you are in the mood for it. Comedy is virtually impossible to get right for everyone. And yet this fusion of body horror and overplayed humour is very enjoyable. I say ‘overplayed’ – that is not strictly accurate. Only the monstrous are encouraged to ‘heighten’ their performances – the townsfolk are allowed to play things fairly straight.

A small town is transformed into a zombie’s paradise by an unspecified meteor landing. First to be affected is Grant (Michael Rooker), brutish husband of heroine Starla (Elizabeth Banks), who undergoes a gradual, hideous but deliberately ridiculous transformation into the hive-mind, whereby all future infected people share his mindset. Conveniently, this means that when (what has become of) Grant is destroyed, all the others are too. But there is a whole horror-show to get through before that even becomes a possibility.

The numerous visual effects and their designers do an incredible job creating a convincing society descent into bloody chaos. Director and Writer James Gunn indulges his story with a growing sense of perversity – with truly appalling tragic moments accompanied by cheesy love songs which ensure we are never invited to take things seriously.

This is a perfect Friday night film - a movie to see in a noisy crowed cinema. It's hilarious in parts, with some great hammy acting and some lines which made me laugh out loud.

The plot parodies many a science fiction or horror movie - and the deadpan policeman's lines are pure comedy, and great fun.

Enjoy the ride and don;t be too serious, and you'll enjoy it, 4 stars.

This is a real second rate b-movie style horror, the story isn't that good, the acting isn't that good and there isn't any real horror. One to avoid.

I like B-movie sci-fi 'creature features'. I like so-called 'comedy horror' films. I enjoy parody. I like films that pay homage to great movies of the past. Perhaps this film tries too hard - or maybe it's just pure rubbish, because I disliked it intensely.

The plot is (of course) somewhat familiar - meteorite falls on smalltown USA bringing alien life-form, which promptly infects local inhabitants who either (1) mutate into squid-like thing, or (2) eat meat and explode, releasing zillions of nasty slug-like creatures, or (3) are chased by said slug-like creatures who enter via the mouth and take over the brain, turning them into zombies. Err, that's it.

The acting and story are deliberately (I think?) cheesy, the attempts at humour are unfunny and seem to consist entirely of inappropriate f-ing and blinding.

1/5 stars - avoid this film like a plague of alien slug beasts.