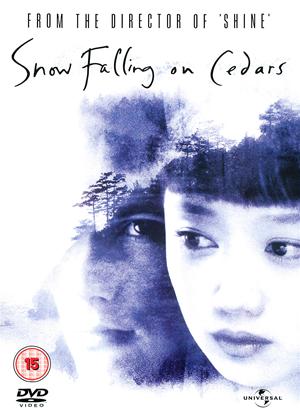 Reviews (1) of Snow Falling on Cedars

An modern type of film. - Snow Falling on Cedars review by GW

I have read the book and, now, seen the film. The original story is, ultimately, a life-affirming tale with some quite sweet references to young-love, albeit with some quite dark events too - it is a potential murder story after all.

The story-telling in the film is modern (as I think) in the sense that it is quite dis-jointed - whilst the main framework is a courtroom drama, many and frequent flashback sequences are used to bring the vital historical events into the telling. You have to concentrate! Even having read the book, I sometimes had to think quickly to ascribe the correct timeline position to some of these flashbacks which were often quite short. My wife, who watched the film with me but has not read the book, says that she was able to piece the plot together fairly well even so but I know (from brief and gentle questioning, subtly done so-as not to give anything away) that she did not always succeed in this (for example, the outcome of Ishmail's visit to the lighthouse is not well integrated into the story-line at first; it seems a mysterious and vaguely presented interlude).

The outcome is that the film gives a rather impressionistic view of the original tale rather than offering a detailed re-telling of it. Perhaps that is all we should require or expect, after all, the film lasts two hours but you would take rather more time in reading the book!

The courtroom scenes are well handled; in particular, the final statements from the prosecuting and defending counsels are really good and remain very true to the original script. It is also true, and as so often in modern times, that some of the dialogue is a little mumbled, but perhaps younger ears would have no problem!

The cinematography is throughout low-key, with rather desaturated colours. I found that surprising and a little disappointing having been looking forward to seeing some super scenery appropriate to Washington state. Although I understand that this gives a unity to the film, I am still in two minds about its necessity or effectiveness. Whilst it fits well with the winter storms that beset the framing courtroom period, there are some important happy periods that could have been shot with a higher colour tonality - even the summer strawberry-picking episode was shot in this way. The result, for me, is that the whole film takes on a slightly depressed look which is at odds with the ultimately heartwarming impression that I got from the book.

A film worth watching? Absolutely. And even better, if you haven't already then read the book too!