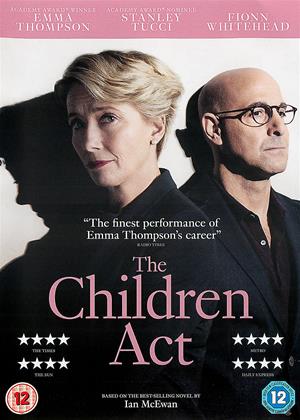 Reviews (10) of The Children Act

Easily forgotten - The Children Act review by BE

In spite of Emma Thompson acting her heart out, this movie never quite hits the spot. Although carefully crafted, bit of a weird storyline. Also too much of walking up and down corridors with doors opening and shutting throughout.

The plot sounds quite moving on paper but isn’t executed very well. Aside from the main theme there is too much indulgent piano playing that non musicians will be bored by.

Annoying scenes towards the end where Emma Thompson needlessly walks home in the rain late at night despite being an absolute millionaire and constantly being in taxis the rest of the film. She arrives home with her wet hair all over her face and doesn’t brush it out of her face. So annoying. Nobody would do this In real life.

Far too many shots of central London which makes it feel like it’s a film made for Americans.

Inconsistency with the husband - or possibly over my head what was going on here.

Very disappointing. Did not get emotional watching this despite the subject matter. Relieved when it finished.

Emma saves a 3 - The Children Act review by NC

Have to give it a 3 as Emma does her job throughout. Not everybody quite up to same level. Makes odd points along the way, but bit meandering. Almost one of the loosely-based-on-fact films the US is in love with. Think writers have just run out of ideas?

A wholly nonsensical plot, with an unconvincing story line . The actions of the Jehovah's Witness boy make no sense and are inconsistent, as are Thompson's reactions to him. The sideline plot around her husband is also not particularly credible and adds nothing.

An excellent film - The Children Act review by JR

An excellent book and an excellent film version. Real ethical dilemmas and emotional strains beautifully portrayed, with restraint. Emma Thompson perfectly cast for this story, as in "Wit". Stanley Tucci never puts a a foot wrong in my view , even as a supporting character here. Hats off to Ian McEwan too for great original story and screenplay.

I'm afraid my opinion of Emma Thompson is that of a self regarding, brainless, lippy luvvie but there's no doubting her acting ability. She's very good. As far as the film is concerned, however, what started of as a promising exploration of moral dilemmas quickly submerged into an emotional quagmire, leaving me feel disappointed. It could have been so much better.

Incredibly poor film, given the talent available - The Children Act review by CR

Its very rare these days that I just give up on a film. However the 'The Children Act' was so very poor that the disc couldn't have come out of my Blu-Ray player fast enough.

Given that its directed by Richard Eyre (Iris, Notes on a Scandel, the utterly brilliant The Lady on a Van), written by Ian McEwan (Attonment, On Chesil Beach), and has the godlike Emma Thompson and Stanley Tucci acting in it , you'd think that has all the markings of an exciting piece of drama. Unfortunately it has very little to offer on any level.

Its visuals are 'televisual' to the extreme. However, as most TV productions look amazing these days I'm surprised how bad this looks. The acting is very poor and wooden, the film's tone is all over the shop and I didn't believe in any of what I was seeing.

It pains me to say this about any Emma Thompson film, but avoid 'The Children Act' at all costs

Thought-provoking and beautifully acted - The Children Act review by CA

I thought this film would be a bit tedious but it was far from that. Emma Thompson gave a totally convincing portrayal of a driven professional so far wrapped up in her job she can't see her marriage crumbling. Spoiler alert. As the male lead was American I was expecting a happy ending - no. Don't watch it on your own (it gives rise to lots of questions) or if you're feeling sad (you'll feel even worse). I can't understand the largely negative views on this site. It was entertaining (not quite the right word) in the saddest and most profound way possible, dealing with some serious and important issues. The reason she walks home in the rain is that she is devastated, guilt-ridden and in a complete daze. When you're that upset you're not aware of physical pain, let alone hair in your eyes. Definitely worth watching - but stock up on the Kleenex beforehand.

I'll give this 3 stars as we both enjoyed it, but at the end were left questioning what we had actually watched. What was the point? What was if meant to be about? Wouldn't bother watching it again and didn't feel like we wasted time watching it, but don't expect to take anything away from it.

An interesting film wherein Thompson inhabits the role of a judge very accurately until one key moment. The young man in question doesn't always convince but the basic premise of the film is a good one and should be of interest to all. For once the procedural and legal aspects of the case seem to have been properly researched which makes a pleasant change (in contrast to the execrable 'Shetland' currently being screened on TV where evidence is tossed around as though it were yesterdays paper). The aggressive questioning of the father seemed a little excessive

I disagree with some of the comments about Tucci's role - clearly driven to distraction by his wife's one-track mind he is driven into a corner. Also not sure about the 'loosely based on fact' comment - a good number of these cases have come to court and at least it was made clear that it is the welfare of the child that is paramount not the wishes of the parent? Several national newspapers have never grasped that fact.

I can’t imagine being a judge on the most controversial of cases is an easy job. The very weight of human life rests on your shoulders in some instances. In the latest case, English High Court Judge Fiona Maye (Emma Thompson) is shaken. A 17-year-old boy, Adam (Fionn Whitehead), has leukemia but his parents refuse to let the hospital give him blood transfusions as it clashes with their religious beliefs. That’s a doozy of a courtroom battle and it’s all the more complicated with her troubled relationship with her husband (Stanley Tucci).

Fiona’s home life is a mess. Her husband is pompous enough to announce his marital affair more as though it were a business proposal. Watching her marriage crumble is draining enough but made all the more heartbreaking by their arguments and their small cousins coming to visit. Dealing with divorce turns out to be a troubling ordeal for her that exhausts her physically and emotionally.

The one person who seems to find the most comfort in her is Adam, won over by her pity and insistence on speaking with him in the hospital. They connect well. Perhaps too well. Realizing Fiona is the only woman who truly gets him where his parents let him down, he gravitates to close to her, trying desperately to bring this woman into his life. Fiona pushes him away but regretfully as she knows their relationship is one that is founded not on legal binding or religious belief but through genuine human nature.

This is the type of story that becomes very flimsy to hold up past melodrama. The courtroom drama of questioning religious decisions that could kill a kid is treated far more routinely than it should be. While the connection between Adam and Fiona is the highlight of the film, its diced far too much apart from the rest of the picture as it takes too much time for Fiona arguing with her ex-husband and feeling distant at parties where she’s expected to play the piano. This staging gives the film more of an appearance relating to a very special episode of a courtroom drama where dealing with Adam is just one of many cases and not as earthshaking in her day-to-day struggles of law and love.

But let’s be fair. Emma Thompson doesn’t slouch on the job and brings the right gravitas and humanity to this role that requires to be exceptionally emotional. Tucci is always a great choice as the snobby elite, given how full of himself he came off in his other affair drama, Submission. And though Fionn Whitehead is reduced to fairly small scenes, he makes the best of what little he has to work with, as will the entire cast.

There comes a point in The Children Act where I stopped caring about whether or not Adam would live or if Fiona would ever find true happiness. The performances are the real strength of carrying this rickety film from being more unique to watch than tiresome to track in its formula. And for that I can really only recommend the film as another testament to Thompson and Tucci’s commitment to any material, weak as it may be, and give it the best coat of dignity their acting can serve up.