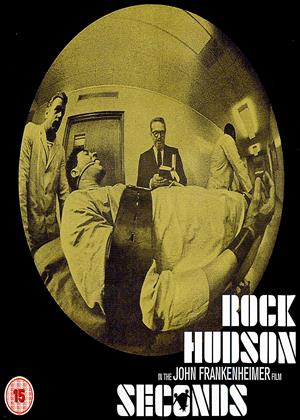 Synopsis:
To the enigmatic question "Who are Seconds?", the film's original poster responded: "The answer is almost too terrifying for words.... The story of a man who buys for himself a totally new life. A man who lives the age-old dream - If only I could live my life all over again." John Frankenheimer directs Rock Hudson as a "second": that is, the newly plastic-surgery altered "reboot" of, in this instance, a listless banker named Arthur Hamilton. Such procedures are carried out by a secret organization known only as "The Company," with the promise of giving an individual a chance at making a fresh start at life...
but at what cost? Master lighting cameraman James Wong Howe provides the paranoiac atmosphere to the skewed reality of what came to be widely considered one of Frankenheimer's very best films.
Actors:
Rock Hudson, Salome Jens, John Randolph, Will Geer, Jeff Corey, Richard Anderson, Murray Hamilton, Karl Swenson, Khigh Dhiegh, Frances Reid, Wesley Addy, John Lawrence, Elisabeth Fraser, Dodie Heath, Robert Brubaker, Dorothy Morris, Barbara Werle, Frank Campanella, Edgar Stehli, Aaron Magidow
Directors:
John Frankenheimer
Producers:
Edward Lewis, John Frankenheimer
Writers:
Lewis John Carlino, David Ely
Others:
James Wong Howe
Studio:
Eureka
Genres:
Sci-Fi & Fantasy, Thrillers

Four years after The Manchurian Candidate, director John Frankenheimer shot this, another conspiracy thriller. But instead of Government, this time he had the Corporations in his sights.

Rock Hudson, in his best screen performance, trades in his old life for new. A new face. A new job. A new personality. But while living this new, better, spiritually reborn life, he discovers some uncomfortable truths about the people who are providing it.

You'll guess the ending. But... this is a very satisfying slice of poker faced sci fi hokum with acid visuals, and plenty of sixties paranoia. A real head-movie. And not to be missed by fans of the conspiracy thriller genre.