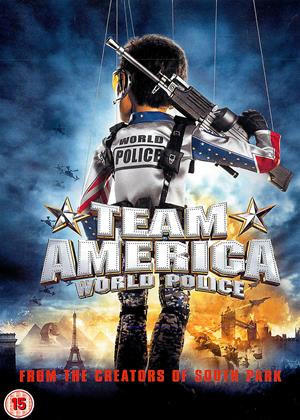 Team America is the latest offering from the South Park team and it's all done with puppets. It cruelly satirises both America's self-imposed role in policing the world and the left-wing Hollywood actors that protest against it. Add to this, Kim Jong Il singing 'I'm Wonewy (lonely)' around his Korean palace and you have a feast of bad taste and laugh out loud moments.

Not one for the kids or granny, the puppetry is flawless but the script is very much adult material - even to the obligatory puppet sex scene. If you like your humour black and you think world politics is pointless, then this film will hit all the right buttons.

Apart from the South Park creators, there are no big names attached to this film, it manages to offend just about every big name in Hollywood along the way and, boy, haven't we waited long enough for that to happen.

Being a fan of South Park in its early days, Team American recycles the same gags and voices albeit in a new form. The technical aspect of World Police is great, what they've acheived with the puppets is impressive, especially North Korea's Dear Leader. As a comedy it is hit and miss, often plummeting into the gutter and throwing in songs when all else fails.

For a US film, this is a startlingly cynical view of America's position in the world. Great stuff! - Team America: World Police review by RP

Events of early 2015 make this a good time to view this satirical action comedy, populated by deliberately and amusingly badly-operated 'Thunderbirds'-type puppets. Team America would no doubt have dealt with the real-life terrorist events in Paris the same way as in the film, with collateral damage include demolishing the Eiffel tower and blowing up the Louvre. And perhaps they would have dealt with the alleged Sony America hack by North Korea (supposedly in retaliation for the film 'The Interview') in a similar vein...

This is a rude, funny and very, very satirical film that pokes fun at how the USA (the one with the guns and ships) exercises its 'right' to scour the world for terrorists (yes, the ones with brown faces) armed with WMD - and kill them. It was made in 2004 so the passage of time has changed some of the targets - the film parodies Kim Jong-il, today it would be his son, Kim Jong-un, as Supreme Leader of North Korea.

Developed by Trey Parker and Matt Stone, the creators of 'South Park', this is a scabrous attack on US political values in the wake of 9/11. If you can live with the f-ing and blinding and puppet sex (!) it's also very, very funny - even after 11 years.

It's not a comedy to watch with your kids or granny - this is adult humour throughout, poking fun at a range of easy targets including our royals and Tony Blair (PM way back in 2004), together with 'liberal' (= left wing in USA-speak) big-name Hollywood actors.

For a US film, this is a startlingly cynical view of America's position in the world. 4/5 stars.

This movie should give all intelligent people hope that the people of America are not all fundamental christian brain dead amoebas who think jeus was suckled by a T-rex.

Great writing, great everything. Proof that, although some - maybe most - americans are idiots bible-bashers, there are some serious brains on that continent!

A breath of fresh air - and sheer joy! I could watch this movie over and over again! Congratulations Mr Stone et al...