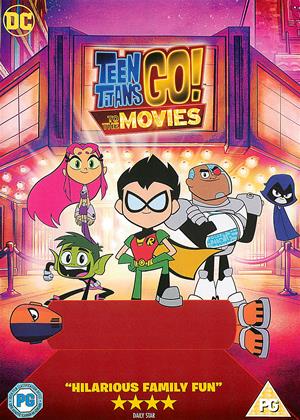 Reviews of Teen Titans Go!: To the Movies

I recall there was much disgust with the simpler silliness of Teen Titans Go replacing the more dramatic edge of the previous Teen Titans animated series. But I gave the show a shot and found it be a brilliantly satirical stab at DC Comics, albeit with a juvenile delight in childish giggles of poop, air-horns, and waffles. In 11-minute nuggets, the show is a short and pleasing series of fast-paced funny that doodles all over the legacy of superheroes with an infectious glee. But do they have the stamina for a 90-minute movie? Indeed they do in a referential romp that topples over the previous contender of Lego Batman.

It helps that Teen Titans Go! To The Movies ventures out of its TV landscape and expands into the realm of superhero cinema, both celebrating and savaging it. In this colorful world of what seems to be every DC superhero, movies have become a trophy for the heroic. Everyone seems to have their own movie, a wicked stab at the tsunami of comic book characters flooding the big screen. And yet the Teen Titans of Robin, Starfire, Beast Boy, Cyborg, and Raven have not had a movie. Robin believes he is next in line, but it seems as though Batman’s butler, car, and utility belt are more notable.

The problem is that the Titans are not taken seriously enough to warrant a theatrical adaptation, too focused on busting out beats and laughing at farts. A possible solution lies in finding a villain to round them out and make them more palatable as action-oriented heroes. They find one, the gun and sword-wielding antagonist Slade (Will Arnett). Although the Titans are pretty sure he’s Deadpool with his similar attire. There’s a whole history of Slade’s character coming before and inspiring Deadpool, but the film never bogs down too much in these references.

As a DC Comics fan, this movie is a huge treat of cameos, casting, and wicked satire. I found myself smirking uncontrollably at John Stewart’s refusal to talk about the Green Lantern movie and clever casting of Nicholas Cage for the voice of Superman, a role he almost had in the late-1990s. Nothing is off limits in this script that savages Batman v. Superman’s clunky conclusion, toys with the origins in a darkly comedic fashion, and even breaks through the barriers of superhero universe to throw some Marvel in the mix.

Kids won’t have to worry about catching any of these references, however, as the comedy is fast enough to shift to another gag if one seems too confusing or in-joke. There’s plenty of goofy musical numbers with hilarious lyrics and a plethora of potty humor. One particular scene must’ve set a record for how many times an animated movie can say the word poop in a short time. But much like the Captain Underpants movie, there’s heart behind the fart, presenting a meaningful story about friendship and being comfortable with yourself. Best of all, it’s never hamfisted into the story, always tossing a joke at the screen in the nick of time before things get too sappy.

Despite a standard doomsday machine plot, there’s so much brilliant comedy at play here that’s enough to please anyone. Tired of superhero movies? The Titans savage this notion. More of a Marvel fan? The Titans will keep crossing over into everything from Deadpool to Stan Lee. Even if you hate Teen Titans Go and would prefer the more dramatic Teen Titans animated series that was replaced, yes, there’s even a special treat for you here as well. I couldn’t stop laughing at such a relentless superhero send-up that Teen Titans Go! To The Movies once more proves that DC Comics properties do better with sillier tones and within animation.