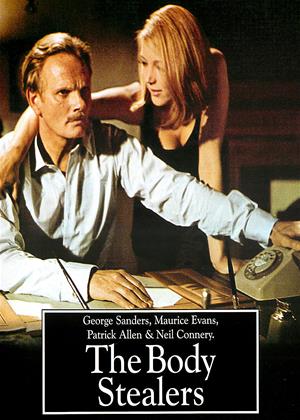 Reviews (1) of The Body Stealers

This little known Tigon production stars the mightily chinned Patrick Allen as the rather smug, lascivious Bob Megan. First seen getting close and personal with a bleach blond female pilot, it isn’t long before he’s leering at any other pretty woman under the age of thirty. This is a world where everyone he meets is waiting to be picked up. Luckily, Allen’s charisma saves the character somewhat.

Parachutists are disappearing. This is why the military have called on Megan’s expertise. The worrying thing is, they are disappearing mid-flight, with a crackling halo of light surrounding them.

The locations are just as wonderfully ‘of their time’ as Megan’s swagger. Filmed during a misty autumn, the period English landscapes are probably the film’s highpoint. Aside from the interesting ideas, the pacing ensures ‘The Body Stealers’ is never in danger of becoming too exciting.

The slowly evolving revelation that there is a distinctly sci-fi explanation for events places this firmly into perfunctory (but enjoyable) ‘b-picture’ territory. There’s a brief appearance from a re-used prop from 1965’s ‘Dalek Invasion of Earth’ in the finale.