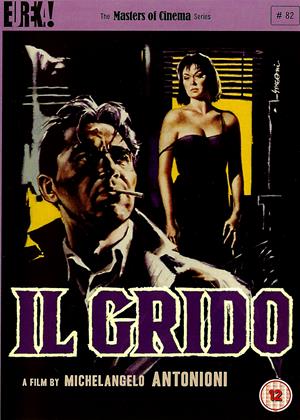 A Sovereign, Or A Somnolent? - The Cry review by NC

Few directors divide opinion as much as Antonioni. For some his films are a snore-fest. For many others they are unsurpassed studies of alienation; of loners or (much more usually) of couples searching for meaning in a meaningless world. Good arguments can be found for both factions, not only across the oeuvre, but also within individual films, and 'Il Grido' is one such example.

Aldo thinks he has found contentment. A beautiful woman and a job he likes - what more could he wish for? So when the opportunity arrives for that happiness to be cemented in marriage, his illusions are shattered when Irma refuses him, furthermore revealing she has found another man. Aldo, small daughter in tow, decides to put distance between himself and his torment, and so drifts across the region, encountering occasional women and jobs; inevitably to find the torment is within himself and so inescapable.

If they're not careful, films about 'drift' and fruitless searches can meander and get lost in a fog of their own making; and unfortunately 'Il Grido' falls into the trap. Aldo just isn't a sympathetic enough character to elicit much care about what happens to him. Even though Rosina, his daughter, is his responsibility, he is willing to leave her alone while he has his fling with his woman of the moment - but it's the woman's fault if Rosina goes missing for a while. He is so wrapped up in his own misery that he doesn't give a second's thought to the feelings of others.

Steve Cochran is given the easy task of having to show one expression only: a soured, sullen slouch. He is so successful that it becomes impossible to believe beautiful women want to spend more than two minutes in his company, never mind want to jump into bed with him at the first chance. The great Alida Valli, an ever-present in Aldo's mind, has only a fairly small part in the film. She disappointingly looks uninterested throughout.

In compensation, the qualities Antonioni is famous for:- the geometry of the shots; the matching of background and landscape with mood, is here for all to marvel at. There are no nice, sunny days - just grey skies, rain, snow, mud and slush. Everywhere Aldo goes the earth is being excavated, built on, destroyed; trees are being cut down, animals (porcupines) are being caught and roasted (the only animals we actually see are a caged rabbit and a scavenging dog). When Aldo returns to his home town the fields are set to be turned into an airfield.

'Il Grido' will give ammunition to people on both sides of the divide about Antonioni. But there is enough here for his supporters to just about win the match on points.

A bleak cry. - The Cry review by RhysH

This is not a black and white film it is a grey and grey film. The scenery is unrelentingly bleak but the perfect background to the story that unfolds.

Steve Cochran is excellent as the morose Aldo. the character craves affection but after he is seen hitting the woman he loves you realise that his disdainful attitude to women is not going to get what he desires.

Cochran is one of a number of American actors in the film dubbed into Italian.