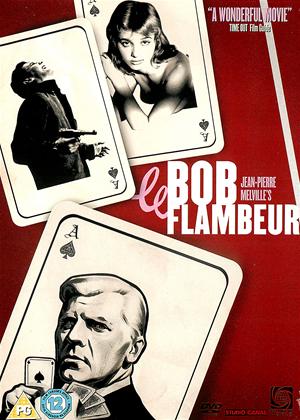 Reviews (1) of Bob the Gambler

Jean-Pierre Melville, credited in this film simply as "Melville" because he was too cool to have a first name (or to use his real surname, which was Grumbach), was in many ways the thinking man's Quentin Tarantino. His films typically, though not always, involved tough guys wearing immaculate trench-coats and hats tilted at the perfect stylish angle doing tremendously manly things in a strangely stylised world where having an unbreakable code of honour is a strength, not the fatal weakness or hypocritical façade it would be for more realist Scorsese-type gangsters. This approach works best in "Army Of Shadows", based on Melville's real-life experiences in the French Resistance, because it makes sense for honourable and genuinely heroic people to be outlaws and killers when the law is enforced by Nazis, and in the ultra-stylised "Le Samourai", which was loosely remade as "The Killer"by John Woo.

It doesn't work quite so well here. The director himself described the movie as an unashamed love-letter to Paris, and the city is by far the most interesting and sympathetic character, which keeps the film extremely watchable during long stretches where, if you think about it, not much is actually happening. The trouble is, at the heart of the story is a gaping hole. It wears an impeccably neat trench-coat and a stylishly tilted hat, and it's called Bob. Who is Bob the Gambler? He's a more or less reformed criminal who never does anything really bad, and he gambles. Although he's a compulsive gambler who seems to lose most of the time, he lives in luxury because he's the hero and he's cool so he must have clothes and surroundings that make him look good even if logically he shouldn't. And of course everyone loves him, including the cop whose job is supposed to be arresting people like him.

Why does everyone love Bob? Because Melville loves Bob, therefore the script makes the other characters constantly remind each other and the audience what a great guy Bob is. I just found him smug, and he prefers men to women so much that I wondered if he was supposed to come across as gay, especially as the film portrays women as, at best, fickle dim-witted nuisances who can't keep their mouths shut, and exist mainly to cause problems for men by being too sexy to ignore. But apparently that's just Melville's male chauvinism, which was extreme even for 1956. Though it has to be said that, even if she's not the world's best actress, Isabelle Corey is perfectly cast as somebody too sexy to ignore, and since this movie is French rather than American, it isn't the least bit coy about her casual promiscuity. If her acting career had lasted a bit longer, she would undoubtedly have been one of the more memorable early Bond Girls. She's got so much more screen presence than Roger Duchesne as boring old Bob that I wish the entire movie had been about her, and how her presence disrupts this ridiculous little world of cardboard man-children.

But despite the perfunctory characterisation and plot - as heist movies go, this one is weirdly short on scenes directly involving the robbery everything is supposed to be leading up to - it draws the viewer in like a superb but unfinished painting, where a master's hand has filled in every detail of the background, but the figures in the foreground are only sketches. So in its own way it's strangely enjoyable. Though I wouldn't recommend it to militant feminists.