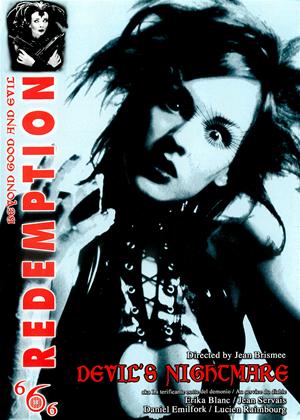 Reviews (2) of The Devil's Nightmare

More nonsense from the early seventies European exploitation cinema industry! According to the synopsis, this version contains two scenes absent from most prints. However, "the lost lesbian scene" is just that gratuitous softcore bit you get in every film of this type which has absolutely no connection with the plot so they could cut it entirely in countries that didn't allow that sort of thing without leaving any discernible gap in the movie. And "the notorious Nazi death baby intro", while genuinely shocking, disturbing, and surprisingly well-acted, leads the viewer to expect a grim, dark, and truly horrific movie.

What we actually get is pantomime for grown-ups with a little bit of blood and some gratuitous lesbians. The acting is terrible, and the English dubbing even worse (though neither of them is quite as bad as the day-for-night photography). The butler, who appeared in the intro to be a totally serious character, is laugh-out-loud funny when he shows the doomed stereotypes to their bedrooms, solemnly informing them for no reason at all of the ghastly murders that have taken place there over the centuries. And of course, everybody who lives in the creepy old castle the villagers are scared of mutters darkly about some curse they're unwilling to explain properly, especially today, the anniversary of that other thing they won't talk about either...

If it carried on like this, it would be hilarious! Unfortunately it sags very badly during the painfully long middle section, which is basically that bit you get in every cheap movie involving a random bunch of people in peril, where nearly all of them spend most of the film being selfish, nasty, and unfaithful to their spouses, so that you're not sorry when they finally get killed. Which in this case only starts to happen two-thirds of the way through, by which time these one-dimensional victims-in-waiting have long outstayed their welcome. And the monster which an early scene showed us, without letting us see the creature itself, to be an utterly nonhuman winged thing so hideous that its appearance could cause healthy people to die of fright turns out, when we finally get a look at it, to be somewhat underwhelming in the makeup department.

Sadly the ghastly deaths, when we finally get around to them, are a bit perfunctory too, and not altogether unpredictable. If, at an early point in the film, our heroes happen to stumble across a room containing, for no apparent reason, a guillotine, do you suppose somebody might at some point just possibly get their head chopped off? Gee, that's a tough one... On top of this we get woefully unconvincing gore effects, and a "hero" who, in addition to being a nonentity, doesn't get around to doing anything whatsoever about the problem until 15 minutes from the end. At which point the movie attempts to turn into, of all things, "The Seventh Seal". Which is quite interesting, but too little too late. Preferable to the real dreck (almost everything by Jess Franco, for instance), but I did find my attention wandering rather frequently.

1971. No wonder so many horror films released at this time sank without trace. No DVDs, no VHS releases. The only time to catch these films was by seeing them at the cinema (or waiting for a possible television showing years later) – and there were so many. 1971 was like an Indian summer for horror – something of a last gasp, but a hugely prolific one.

This Belgian/Italian offering is directed by Jean Brismée and also known as ‘La Terrificante Notte del Demonio’. It boasts a terrific soundtrack composed by Alessandro Alessandroni (with mesmerising vocals from his sister Giulia.) Following a harrowing scene were, during a World War 2 air-raid, a woman dies delivering a child which is then stabbed to death by Baron von Rhoneberg (Jean Servais), we are brought up to date when a bus load of lost tourists arrives at the Baron’s castle, in search of somewhere to stay for the night. He is an alchemist in the grip of a curse involving a deal with the Devil, who has demanded the eldest daughter of each generation becomes a succubus.

As the tourists are shown to their rooms, the sinister butler Hans (Maurice De Groote) gives them a gruesome history of each room – such morbid, relentless tales become somewhat ludicrous in the telling; there is barely a curtain or a slab of stone that doesn’t hold some macabre secret – and each time, a claw-like pattern is left at the scene.

Into this classic setting, the tourists – including a feuding husband and wife, two attractive young women who discover they are lesbians (leading to inevitable softcore scenes), and a Richard Chamberlain-like priest – then meet a new guest. Lisa Müller (Erika Blanc) immediately attracts attention from the men and a certain jealousy from the women. Blanc’s sultry, pout-some presence and typically exotic, revealing clothing – as well as the way she moves lizard-like amongst them – sets her apart from the ordinary. Could she be the legendary succubus?

Her transformation from lithe, mysterious seductress into a mad-eyed, chiselled malignant spirit is hugely effective, a triumph of minimalist make-up and a powerhouse performance. Scary and deadly as she is, she isn’t quite the main monster here, for Satan himself appears. Another supremely frightening performance, this time from the skeletal (Daniel Emilfork) ensures we don’t forget the appearance of the Devil in any hurry – it is he who orchestrates events that land the tourists into the castle in the first place, and then to a more permanent state in a twist ending.

Ironically, only Müller and the priest (Jacques Monseau) remain at the end. Only after reading a synopsis of ‘The Devil’s Nightmare’ did I realise a further detail to this excellent, underrated euro-film – each death represents one of the Seven Deadly Sins, with the Priest volunteering to sacrifice his soul to save the others, representing Pride. A highly recommended low budget frightener.