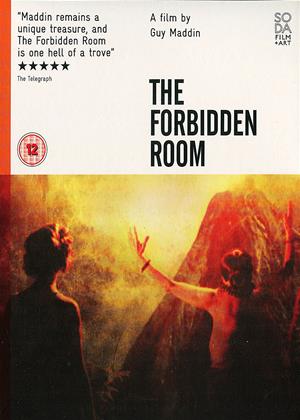 Reviews (5) of The Forbidden Room

What sets this film apart is its staggering level of non-stop inventiveness. Not a single frame of it is quite like anything else you've ever seen, except those century-old German expressionist silent movies where anything could and did happen, if you've seen them in slightly imperfect prints with the original hand-tinting lovingly restored but all the scratches left in. Only crossed with "Un Chien Andalou", "Eraserhead", and a print of "White Zombie" that's had paint thinner spilled on it.

This is also what prevents it from being a masterpiece. There are more than enough ideas here for a trilogy, let alone one movie, but the structure of the nearest thing it has to a plot - multiple barely-connected stories nested within one another so that although none are longer than 15 minutes, some have a gap in the middle lasting an hour and a half - feels more like a clever way to turn a lot of unconnected short films into a feature than an actual movie, and eventually becomes incoherent in the most literal sense of the word. Guy Maddin seems to have forgotten how much the power of "Un Chien Andalou" was diminished in its semi-sequel "L'Age d'Or" (which has a similarly chaotic structure to this film and was obviously a major influence) because this kind of random bizarreness isn't really sustainable over feature-film length. At very nearly two hours, "The Forbidden Room" stops looking quite so novel long before the end, and starts to get a bit tiring. I should also add that, in the same way that watching "The Blair Witch Project" caused some people to feel seasick, if flickery old home movie footage is hard on your eyes or gives you a headache, this film definitely won't be much fun for you!

All the same, it manages to be laugh-out-loud funny more often than a lot of so-called comedies, and packs more imagination into every ten minutes than the average superhero franchise spreads over ten hours (for about a millionth of the cost), which are clearly things to be encouraged. If Guy Maddin could escape from the art-house ghetto and meet the mainstream movie biz halfway, I'd love to see the results - "Sky Captain and the World of Tomorrow" done properly, perhaps? Or even The Goddam Forties Batman versus Hitler? In the meantime, we've got this film to be going on with, and it's certainly different. Probably too different for a lot of people, and certainly not perfect, but if you're in the mood for a profoundly weird movie that you don't have to take seriously for one second, it'll be years before anything else comes along that's both as strange and as silly as this.

This is one of those "arty" films that some people will rave about because it is "different", "inventive" or "challenging".

Well, I thought it was rubbish. It looks like a couple of A-level students made it on a budget of £100 ... and had to get it finished on a Sunday afternoon because they had better things to do.

How this gets such a high rating I don't know. It is not original; sadly I've seen plenty of other bad films just like this.

What a disapointment - The Forbidden Room review by DB

Dreary, insubstantial and derivative this film lacks the true inventiveness it so desperatly emulates. Its all been done before and sadly this rehash of everything from modernist film to psychedelic video game ends up being truly annoying. It is quite funny in places - but for all the wrong reasons.

What is it about? - The Forbidden Room review by CSF

How can I write 100 characters on a film I did not understand. I forced myself to watch 20 min, then got the awful impression to waste my time and got bored to tears. I would certainly avoid the films Cinema Paradiso advises me to watch by saying "more like The forbidden Room! How can they put The Lady in the Van in that list? What has it got to do with The Forbidden Room? It's just as appropriate as to compare with a Disney film!!

Torrent of visual pleasures - The Forbidden Room review by TE

The overall aesthetic is pulpy and lurid, with undertones of memory and movie history. Guy Maddin is a true original, a one-off even amongst avant-garde directors.

Four stars rather than five simply because the whole film is a little too episodic. The parade of scenarios could have been linked together better, and if anything it suffers from a surfeit of energetic invention. But is mainly, funny, stimulating and absorbing.