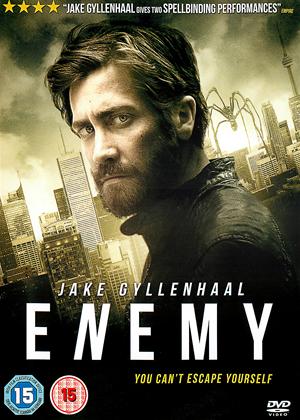 Encountering a double of oneself is a recurring theme in many novels and films - and that's what 'Enemy' is about. It's a stylish psychological thriller, with an excellent central performance from Jake Gyllenhaal who plays both roles as 'the double'.

I found the film gripping. Not only is it mysterious and confusing, but it includes repeated bizarre images of spiders - beneath the foot of a naked woman, as the head of a naked woman, towering above the cityscape of Toronto, a web of overhead electrical wiring, a web-like pattern of cracks in shattered car window. The film ends with one final bizarre spider image.

'Enemy' requires some detective work to understand and will repay a second (or more!) viewing, but the clues are all there. Perhaps the most obvious clue is a strapline on the film publicity: 'You can't escape yourself'.

Adam is a college history teacher. He lives a spartan life and his girlfriend (wife?) leaves his bed early. Adam views a film and sees that a bit-part actor looks like himself. From the film credits, he finds the actor's name (Anthony), stalks him and eventually meets him. Who is this man, his doppelganger? Are they one and the same? Is one a figment of the other's imagination? Is Adam suffering from a psychosis? Why is he recognised as Anthony by others? Who are their wives?

This is great stuff and I urge you to see it - some of the imagery is still haunting me, days later. I understand that the novel (by the Portuguese Nobel prize-winning author José Saramago) is somewhat different - but the film has impressed me so much that I've ordered a copy of the book 'The Double'.

I rented this movie after watching the absolutely brilliant Nightcrawler (2014) which also stars Jake Gyllenhaal.

This, however, is not in the same league. It is a Canadian movie with French director, and thus pretentiousness is probably to be expected. It is set in Toronto - but the director succeeds in making it look like greyer then grey concrete jungle East Berlin circa 1977. How very art-house...

But this film is also confusing, with pointless and surreal images occasionally - just, it seems, to say 'hey, I am all arty, look at me' and it really does not work. A silly opening sequence makes no sense. It may work in the novel, but not here - and I sure the writer is just fixated on spiders anyway because they bear no relation to the plot. There are better films about doubles (the man and his shadow, for one, and others: it is a very old dramatic idea, after all).

When it gets into the body double plot it's passable. But a director would have been better to dump the surreal parts of the novel and focus on the thriller element. The ending is again utter misjudged and pretentious. The old trope of 'is it all a dream' is trite beyond belief.

Also, there were NO subtitles which is annoying - in movies where characters mumbles, having HOH subtitles is the way to go!

Not too sure about this film - Enemy review by Doug

You're going to be tempted because of Jake Gyllenhaal.

But seriously, trust me, just save yourself the tedium and DO NOT BOTHER.

Save losing 1.5 hours of your life and avoid - Enemy review by SW

Well what can I say. The husband gave up watching after 8 minutes and went and watched Masterchef. Seriously he's a man who never watches cookery programs.

The film is dark and not very well acted out or filmed. The story is so far fetched is quite naff. It's starts off oddly then jumps to another storyline. I only watched it hoping it might be better.

It did not. Wished I had watched Masterchef now

Watched about 20 mins and couldnt be bothered. One of these up-itself films with a miserable guy wandering around all fed up.

A stylish film which was building quite nicely - until the abrupt ending which I have to say was the oddest / lamest / ending to a film I think I've ever seen.

I should have known when i saw the director was Dennis vilenuve to not bother with this. Dennis gave us the equally dull arrival and awful blade runner 2049. He is a purveyor of slow dull films that make no sense to anyone while the critics lord it over him calling his work "challenging" and "arty". Avoid.

Not even worth 1 star - Enemy review by NL

Very, long and drawn out.

Only last 45 mins into the film and could not take any more.

We did not watch all of it and we still guessed the ending - it made no sense!!

Denis Villeneuve’s Enemy is a fascinating thriller that is one of his most challenging and haunting pictures to date. It’s a case of identity as Jake Gyllenhaal plays two characters: a quiet college professor and a bitter actor. But this is far from your standard or sitcom-level case of doubles separated at birth. They don’t meet up with each other in an awkward mimic-mirror moment of comedy. They don’t go the route of the Prince and Pauper where they swap lives in that tired old device. Enemy instead chooses to focus sharply and artfully on the biggest issue with discovering your duplicate: a loss of individuality you cannot shake.

Adam Bell (Jake Gyllenhaal) is a creature of habit. He teaches a history class, comes home to his girlfriend and mostly keeps to himself. While watching a movie by himself, he notices one of the actors happens to look exactly like him. After some digging, he discovers this man is Anthony Claire (Jake Gyllenhaal) and takes it upon himself to learn more about this individual. He sneaks into his agency and receives a few more details about this actor. It isn’t long before he decides to call up Anthony and have a meeting that is strange and uncomfortable for both of them. Anthony grows paranoid of this individual as the marriage with his pregnant wife is on the rocks. This brings about his own means of revenge which takes a nasty and unexpected turn for the worst.

The central theme of the picture is about losing control of one’s world when presented with such a chaotic discovery. Adam’s life seems to follow a simple routine that is thrown out of balance the more he discovers about Anthony. He begins to lose track of the world around him as the city buildings seem to contort and twist around him, appearing to form a trap. Throughout the picture is the presence of spiders. The opening shot features Adam (or Anthony?) attending a secret stripper party in which one woman places a spider on the ground and begins to crush it with her foot. Sometimes he starts seeing spiders in the strangest place such as the faces of women that pass him by. And other times it just gets ridiculous as a long-legged arachnid looms over the city.

This bizarre imagery displays just how far deep Adam is caught in the web of danger with no means of escape. His double is present and robbing him of everything that made him different. In one of Adam’s lectures, he states that a totalitarian state will censor any means of individual expression. But who is censoring Adam? According to director Denis Villeneuve, it’s the uncontrollable force of one’s own internal dictator. Perhaps Adam secretly wants this fear in his life to shake up the dreary, yellow-tinted world he occupies.

Enemy is a character study that is as richly complex as its challenging visuals. Jake Gyllenhaal not only succeeds at playing dual roles, but creates real terror both self-inflicted and doled out to his opposite. It’s an incredibly intense thriller that takes the audience on a psychological trip through strange visuals that may or may not be hallucinations. The whole experience keeps you guessing right up to the final shot in which everything the protagonist has been running from confronts him head on just when he thinks he’s out of the woods. This is one heck of a movie puzzle to put together with powerful performances backing up such a deviously intriguing script.