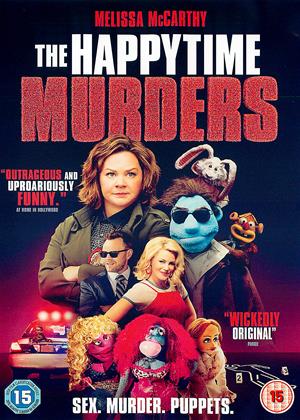 Reviews (6) of The Happytime Murders

What a load of tish - The Happytime Murders review by ML

Didn't even make me grin let alone laugh!!! Absolute rubbish!!!! Blimey, I have to talk about this rubbish film for an extra few characters

No! - The Happytime Murders review by JL

I should have looked at these reviews before I ordered this film. I only booked it because it has Melissa McCarthy and my wife is a fan. It didn't help that my 88 yo mother was there watching as well! We gave up after about 25 minutes, McCarthy was doing well and, yes, some of the gags raised a smile but that was it. It's a bit like a poor-man's Ted, all the language but none of the finesse - if you can call it that. We just didn't get the puppet side of things.

Reviews put me off..... - The Happytime Murders review by MP

......so I never bothered watching it. Plus nobody can do puppet based humour quite as well as Team America.

Not the Best Muppet Movie. - The Happytime Murders review by porky

I Love Muppets , I love All the Movies. But this one seriously Lacked in many ways.

I didn't have a problem with its Adult Content ,I had No Problem with the fact it was aimed at Adult Audiences .

But it Just Tried Too hard to be Rude which just wasn't Funny.

If they had just made a Comedy that included Muppet Characters and had all the usual Funny stuff a regular Comedy has then it would have been Fine but they didn't .

Enjoyable to a low level. and slightly tedious because it just kept playing the same Joke over and over .

Had to turn it of after 15 m8nutes , it wa simply awful and not funny in any way.waste of money and not recommended . Wish I hadn’t bothered renting it

The subversion of watching Muppets doing gross-out things and escape from their more wholesome perception is no new feat. We’ve seen the subversion for decades, from Peter Jackson’s darkly satirical take on The Muppet Show with Meet the Feebles to the layered parody of Greg the Bunny. Even within the stable of the Jim Henson brand, the adult nature isn’t foreign after the puppet-centric sci-fi series of Farscape, where creatures of all sorts pursued graphic violence and sensuality. So what exactly does The Happytime Murders have to offer outside of the carnival attraction of puppets having sex, cursing, and killing each other?

Not much. At all. Here’s the forgettable story staged around the puppet savagery. Phil is a private detective in a puppet society where puppets are treated as second class citizens. He was the first and last puppet cop, after refusing to kill another puppet. Disgraced, he retreats to the noir lifestyle of booze and private cases. No, noir doesn’t seem accurate. While Phil does have the hardboiled attitude present, his world always seems bright, clean, and well-lit. Where’s that gritty noir edge that was more present in the concept art for this production?

Phil is called into a case of a serial killer targeting puppets from an old sitcom. Working alongside him is his former police partner played by Melissa McCarthy. While Melissa is a solid choice when it comes to wit, she is handed a clunky role that requires her to mostly back off and let the puppets do all the gags. Oh, and how desperate these gags are for laughs. Puppets cursing at each other, having wild sex with silly string, and getting ripped up into messes of fluff where the only punchline to any of this is “wow, look how wickedly adult these puppets appear.” There’s a sex shop where an octopus is seen masturbating a cow, a gag which is decent but unfortunately repeated too many times, most likely because the director knew this was the best he’s got.

The puppet world itself also feels not all-together there, despite a few details. There is some interesting lore with McCarthy’s character having puppet organs but it’s a bit used to make her puppet enough to try puppet cocaine, which seems to just be triple-sugared pixie sticks. And yet most of the details of this world feels slapped and tacked on with a grossly simplistic means of writing the story as it goes. And it all comes so standard, to the point where side characters merely fulfill one very specific function and have little funny to say. Adam Scott feels wasted as the condescending FBI agent and couldn’t the film find a better use for Elizabeth Banks? The only side character that seems to have anything funny to do is Maya Rudolph as Phil’s assistant and it’s only because she shares one scene with McCarthy where she’s allowed to go off the rails and talk about how puppets are raped in prison with rice.

This film feels like a hallow and soulless version of what it could have been. Far more work was put into staging puppet stunts than any of the characters. I can’t think of a single notable or quotable line from the likes of Phil or McCarthy, both build for a very specific purpose on a rigid track they cannot escape from. Henson Alternative, the fairly new company seeking to try out new and adult forms of puppet comedy, needs to realize that if they want to be the subversive type of studio with the puppet medium they need to serve up more than scenes of filth for the sake of filth. When even a low-budget and gross-out picture as Meet The Feebles knew this in the 1980s, I can’t help but feel we’re going backward when it comes to usually kid-friendly mediums given an adult glaze.