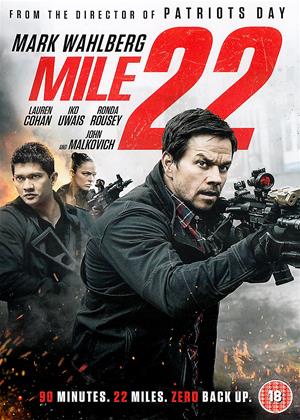 Not a great film. - Mile 22 review by Schrödinger's Cake

I’m not averse to abandoning a film midway through when it starts to get ridiculous, and sadly this one fell into the bail-out bucket at around 30min or so.

Mark Wahlberg has been enjoyable to watch in a bunch of films, but this time around it’s as if someone said to him, “Have you seen Lethal Weapon? Yeah? Do that shout- a-lot-crazy-shit thing.” Which works for a couple of scenes, and then just gets dull. To the point where it felt like a parody.

Not only that, the super-elite tactical team ditch all their SOPs and make loads of ridiculous errors of judgement etc which just left me feeling it was pretty unbelievable, frustrated and disengaged.

Not a great film.

What a mess - Mile 22 review by Alphaville

Another in-yer-face actioner from director Peter Berg and this one’s a complete mess. In SE Asia a team of US special forces has to move a defector 22 miles from a city centre to a plane. Characters shout and swear at each other incessantly. The camera shoots them too close-up, often focussing on irrelevant detail. The action is shot with a handheld camera and chopped up by over-editing into a complete mish-mash. It’s difficult to get a handle on anything that’s happening, especially as the plot doesn’t set in until half-way through the movie. To confuse matters further, there are even unnecessary time jumps to a future debriefing of the operation.

As if this wasn’t all gung-ho enough, usual Berg lead Mark Wahlberg this time plays a character with a hyperactive disorder. His macho monologues are painful. Indonesian star Iko Uwais plays the defector, but he’s basically shoehorned into the film for a couple of martial arts fights that are shaky-cammed and edited to oblivion.

Any good points? It’s so ridiculously bad that it’s a primer on how not to shoot action and the DVD contains a raft of extras on filming for the first time in Bogota, Columbia.

This is terrible stuff. Right from the start this is the sort of film that has you routing for the bad guys.

The hero team are an unlikable, uninteresting bunch. Mark W's Character taking the biscuit by just being incredibly annoying. And pointless.

The film could be saved by the action tho. No.

But never fear, some asian guy who knows martial arts is brought in for some chop soki action. No there to. The action - as is all the action in the film made near unwatchable (as in make me feel motion sick) with the shaky cam and constant cuts to hide the fact the director doesnt know what he is doing and none of the actors know how to fight or shoot. I feel sorry for the Asian guy as it looks like he might be half good.

this is a truly dire film. But worse still seems to be the pattern these days. Diversity, marketing opportunities and a big hollywood name are what sells films it seems. Not realistic, believable, exciting action.

Ah, but wait, there is one good thing about this film. The ending, and im not being sarcastic. If you make it to near the end, hang it out. It brought a smile to face and the word 'Winner' sprung to mind. If only they could of put it into a decent film.

Dismal script, dismal direction, dismal Mark Wahlberg performance who seemed to be bored with the whole thing. I hope he's not following the same path as Bruce Willis and Nicholas Cage, acting by numbers to supplement his pension.

Whilst not outstanding this is a good action film, with some pretty strong sequences, quite edge of the seat at times and a great twist to the story. We'll worth a look.

Action all the way - Mile 22 review by AL

Bored of pretentious or serious action films which seem to have very little action in them? If so this could be for you.

Loads of action, car chases, gun fights and fisticuffs!! Add to that a good bit of needless swearing and some gore, awesome!!

Mike Wahlberg is great and Iko Uwais (that fella from the movie The Raid) is awesome and has some great fight scenes.

Interesting from start to finish with very little needless over emotional/sentimental rubbish they usually shoe horn in.

This is non stop action and makes you hold your breath on occasions. Bit gruesome and bloody but that's the name of the game.

Good storyline and gripping edge of the seat stuff.

I think the casting for the lead role in this film - was a joke. Along with mumbled, pointless rhetoric from the script and Mark Wahiberg, it was very boring and over complicated chat for such a simple plot. The action was really exceptional and very realistic.... except for the way o/t and far too much martial arts, which gave the film a 'Jacki Chan' feel. What a shame, the action far outshone any acting/script. Worth a watch.