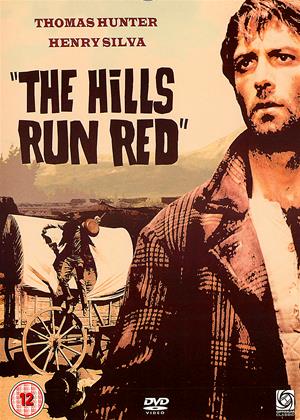 Reviews (1) of The Hills Run Red

Yes, it's another of those movies billed as a "classic" by the folks round here, who, as far as I can tell, think that word applies to any film whose own packaging says it's a classic (so presumably they think the Democratic People's Republic of Korea is a democracy?), every film on the infamous "video nasties" list, and every movie ever made by Italians. This movie was undoubtedly made by Italians, so by the in-house definition it must be a classic. As usual, by everybody else's definition it's the exact opposite.

From the director of "Requiscant", a misfiring spaghetti western about a borderline retarded holy fool who wins gunfights mostly thanks to divine intervention which somehow forgot to be a comedy, comes further proof that if you haven't got the slightest idea how to film action in general and gunfights in particular, you really shouldn't make westerns. Some of the cinematography is so odd I assumed the film was shot in 3D, but apparently it wasn't, so presumably Carlo Lizzani (credited as "Lee W. Beaver" in an attempt to persuade American audiences the movie wasn't foreign) believed that if he included enough extreme close-ups of faces and other random objects looming into the camera lens at peculiar angles, it would look like a Sergio Leone film. Predictably, it doesn't.

Though it sounds a lot like one, in an "Ennio Morricone on a day when he simply couldn't be bothered" kind of way. In fact, it sounds so much like an exceptionally bad Morricone score that I looked it up, and that's exactly what it is. Presumably it was at his own request that his name was omitted from the credits. Which sums up everything wrong with the movie. Thomas Hunter, in his first major rôle and hoping to make the breakthrough into stardom (he didn't) is absolutely appalling. He would have been perfectly cast as one of the many slimy varmints gunned down by the hero, but inexplicably he plays the hero. Henry Silva and Dan Duryea, both well-known and thoroughly dependable western character actors who appeared in some genuine classic westerns alongside the likes of Randolph Scott, clearly know they're in a film so bad it's not worth making any attempt to save it. Duryea, who has very little to do except at the end and is completely absent from most of the film, seems to be trying not to laugh and only just succeeding, while Silva delivers a performance so over the top that it's the only truly entertaining thing in the film, though I very much doubt that Lizzani/Beaver directed Silva to act like a parody of himself. And everybody else acts about as well as the supporting cast in badly-dubbed spaghetti westerns usually do.

People get killed in various ways, dynamite explodes, horses thunder about, and so on, but it doesn't really add up to anything except a list of ticked boxes. The overall feel is that it was made by a director who, if he was a chef, would think the secret of good cookery is to chuck all the ingredients straight in a casserole, bung it in the oven, et voila! If this movie was a meal, even the fruit salad would involve unpeeled fruit, and the chicken wouldn't bear thinking about. Luckily you don't have to eat it, just watch it. In fact, you don't even have to do that if you don't want to, so you probably shouldn't. One more thing. If you're familiar with the name "Dino De Laurentiis", you might find it useful to know that he produced this film. If you're not, you might find it useful to know that in the movie industry he was nicknamed "Dino De Horrendous". Enough said...