Rent The Hound of the Baskervilles (1978) 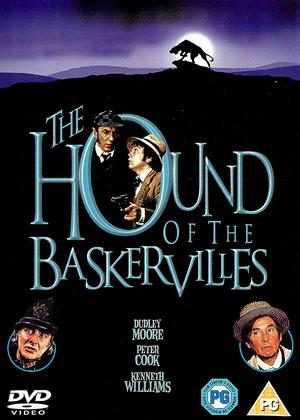 Synopsis:
"The Hound of the Baskervilles" as you've never seen it before. Peter Cook and Dudley Moore (Sherlock Holmes and Dr. Watson) give us their unique interpretation of the Conan Doyle classic, supported by an all-star cast of British comedy greats. What is the curse that hangs over the Baskerville family? What is the terrible beast that roams the moor? Exhausted by his most recent case, Holmes sends Watson to Baskerville Hall to solve the mystery on his own while he takes a well deserved rest in London's nightspots.
Watson, on his first solo case, investigates the strange goings on at Baskerville Hall and begins to suspect everyone he questions, including himself, until frustrated at every step, he has to call for the great detective to help him out. Their discovery at Grympen Mire of the real Hound of the Baskervilles is too horrible to tell.
Actors:
Peter Cook, Dudley Moore, Spike Milligan, Henry Woolf, Josephine Tewson, Prunella Scales, Jessie Matthews, Lucy Griffiths, Dana Gillespie, Roy Kinnear, Kenneth Williams, Max Wall, Terry-Thomas, Irene Handl, Hugh Griffith, Joan Greenwood, Denholm Elliott
Directors:
Paul Morrissey
Producers:
John Goldstone
Writers:
Peter Cook, Dudley Moore, Paul Morrissey, Arthur Conan Doyle
Studio:
Prism Leisure
Genres:
British Films, Comedy, Drama
Countries:
UK

Rent other films like The Hound of the Baskervilles

Reviews (1) of The Hound of the Baskervilles

Well, it's certainly a dog... - The Hound of the Baskervilles review by Count Otto Black

In 1978, Paul Morrissey, best known for directing semi-improvised gay arthouse movies and a couple of gory horror spoofs for Andy Warhol, thought he'd try his hand at making something in the style of the Carry On films. It was not a wise move, to put it mildly. As Sherlock Holmes and Dr. Watson, Peter Cook and Dudley Moore talk in extremely broad and, especially in Dud's case, incredibly annoying accents (Jewish and Welsh respectively). A galaxy of English comedy stars, all at least a decade past their best, struggle gamely with material that's utterly beneath them, but when the comedy highlight of a film involves a chihuahua with an impossibly huge bladder pissing endlessly all over Dudley Moore, that film is in deep, deep trouble.

The DVD contains two versions of the movie, and oddly, the director's cut is, at a very concise 71 minutes, 10 minutes shorter than the theatrical release included in the extras. I had no intention of watching another, longer cut of this howling clunker to see what had been taken out, but it tells you something when the director of an 81-minute film reckons it needs trimming! The short interview with Paul Morrissey also included in the extras doesn't address this point, but he does reveal that Dudley Moore wasn't at all happy with the crudity of the humor, which may explain his terrible performance. Peter Cook seems to be trying even less hard, and many of his contributions to the script are scenes which have nothing to do with the plot, including a completely irrelevant and, in the context of the film, nonsensical reworking of the famous "One Leg Too Few" sketch he wrote in 1960.

These pointless scenes, some of which feature Dud (thankfully giving us a break from that horrible Welsh accent) in drag as Sherlock Holmes' mother, are funnier than anything else in the film, probably because they're the bits where the script had the most input from Peter Cook and the least from Paul Morrissey, but they're nowhere near enough to redeem this gobbler. When a movie opens with the sight of Dudley Moore ironing a pair of soiled underpants in front of some nuns, it's hard to see how it can go downhill from there, but somehow it manages to, culminating in a dinner-party scene where Dud accidentally drinks dog urine before being sprayed with projectile vomit because everything's better with random parodies of "The Exorcist". If you think that sounds hilarious, you might manage to enjoy this so-called comedy, but I doubt it.

By the way, if you're tempted by the fact that in the publicity material Spike Milligan is third-billed, and the artwork on the DVD features his face more prominently than anybody else's, you should know that Spike's in this film for exactly one minute.