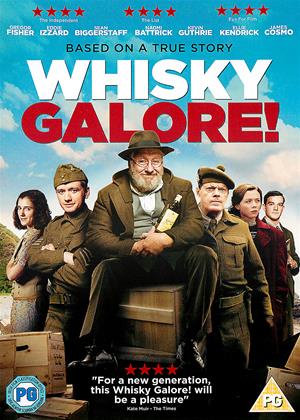 Nice little re-make of a very old, known, film. All good acting and takes very simple plot along well. Characters all credible, and Greg shows he can actually act without a string vest on.

A very watchable remake of the classic Ealing Comedy. Sticks very closely to the book, but did feel that some of the characterisations could have been a little sharper than they were.

Quite a poor adaptation of Compton MacKenzie's book and the Ealing Film - Whisky Galore! review by rh

Compton MacKenzie was a prolofic and talented Scottish author whose works have been adapted for film and TV. Whiskey Galore and The Monarch of the Glen are probably the two most famous. The first is loosely based on the sinking of SS Politician which sank off Islay with a cargo of alcohol destined for the West Indies.

In the Ealing Films version it was played very much in the slapstick style and thanks to some great British character actors became a much loved success. Unfortunately, the remake cannot decide whether to be true to the book or the earlier film and as a result has the charm of neither. As a previous reviewer said, some of the characters needed work, but also, in my view, did the sets. It felt low budget, almost made for TV with indoor or restricted shots. No sense of the grandeur of the Isle or the remoteness of the location. at the time of the events, there were no decent roads to the Inner Hebrides and so the community really was isolated. The villagers could never see why their locawhen there were few decent roads to the Inner Hebrides. This is something the Ealing film achieved.

A feelgood story,but not a feelgood film - Whisky Galore! review by MW

The cast is promising and the story comfy, so it ought to work but it doesn't.

While some performances are nuanced, poor Eddie Izzard's is decidedly not.

The script is predictable.

The direction is pedestrian.

The cinematography lacks the beauty one would hope for.

It isn't quite awful, but it's a close-run thing at times, I'm afraid.

I probably have seen the original version but didn't have a strong enough memory of it to compare the two.

This version is an easy watch for the family. I can see why some reviewers have been more critical as there is a lack of depth to some performances.