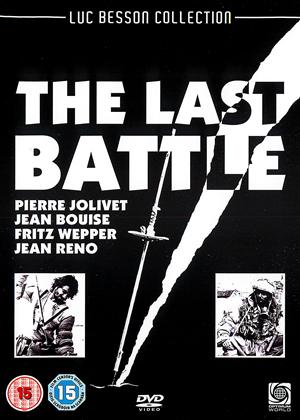 Synopsis:
The sky is raining fish. Skyscrapers sit in mountains of sand. Bandits sleep in trunks of used cars. It's a world of the future. A world called Planet Earth. And he's one man just trying to survive. In Besson's haunting, beautifully realised vision of a post-apocalyptic world, few have held onto life, and fewer still to humanity. An unknown trauma has robbed mankind of their ability to speak, and they remain, mute, in the unexplained wreckage of what once was. The Man (Pierre Jolivet) is an isolated survivor wandering the hostile streets of a collapsed civilization.
He lives in a long-abandoned office building, fighting off attacks from nearby thugs and gathering together disused car parts for a makeshift airplane, hoping to fly away from his sombre prison. Escape, however, offers little respite, as he leaves one dead city for another. In the midst of this new wasteland, "The Man" encounters his nemesis, "The Brute" (Jean Reno); a violent aggressor who becomes determined to destroy him. By chance he stumbles into a derelict hospital, and finds there an old doctor who is hiding from The Brute. Together, the two seek sanctuary from The Brute, and gradually, in the grey and sterile world, a friendship begins to grow.
Actors:
Pierre Jolivet, Jean Bouise, Fritz Wepper, Jean Reno, Maurice Lamy, Jean-Michel Castanie, Christine Kruger, Bernard Havet, Garry Jode, Michel Doset
Directors:
Luc Besson
Aka:
Le Dernier Combat
Studio:
Optimum
Genres:
Action & Adventure, Sci-Fi & Fantasy
Countries:
France, Action & Adventure, Sci-Fi & Fantasy

Reviews (1) of The Last Battle

It seems that Luc Besson consciously sets out to explore a different genre with each new movie. This is a film that would always be in danger of being unwatchable if directed with less skill.

Given the constraints it sets upon itself (almost entirely silent & in black and white), the film is quite gripping (particularly after the first fifteen minutes) and very suggestive.

Certain elements of the plot are a little twee, however it does develop its vision in a meaningful manner, with three contrasting main roles. The absence of language helps raise questions on the relative virtues of each of the lead characters, and the dominant theme of the lead character's sexual frustration helps to afford the film momentum.

A daring film, that is far better than it might have been.