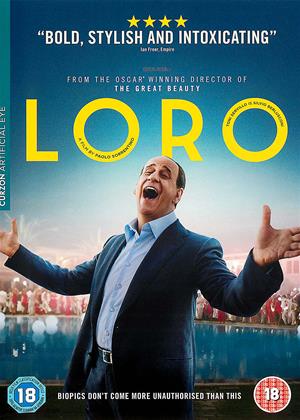 If you liked The Great Beauty this will be right up your street. We found this film informative, offensive, outrageous, but, above all very watchable and extremely amusing. Power corrupts and absolute power in the main gets away with it, with a cast of in the main part willing volunteers. Toni Servillo is impressive and even when his character is being essentially quite ruthless and manipulative, he still amuses.

This film deserves 10 stars let alone 5! A fascinating satirical take-down of Silvio Berlusconi, in which the satire is administered via both a velvet glove and a sledgehammer.

As with The Great Beauty, the filming is simply gorgeous. Every frame is like a beautiful still composition in itself.

The sets are sumptuous, and the soundtrack lives up to Sorrentino's reputation for being the world's best director of sound and image.

The clinching brilliance in Loro is the way in which Sorrentino reveals Berlusconi as a prototype for Donald Trump, in background, in personality, in megalomania, and in sleaze.

This is Sorrentino back at the top of his game.

I rented this because I expected to see a bio of Berlusconi, with a bit of satire.

Impressionistic portrait of a titan - Loro review by AER

Loro opens with a disclaimer telling the viewer that the content of this film is made up of guess work. What follows is a really well-made portrait of the former Italian premier and his world of privilege and megalomania. We also see the lavish parties that were thrown for him filled with models and dancers. It's all fantastically cinematic and wonderful to look at as you'd expect from a film by Paolo Sorrentino. Toni Servillo as Silvio Bersculoni is super and strange, and very watchable. However, he doesn't actually turn up in the film until 40 minutes in, and the film's early leads are faded into the background around this point (incl. Riccardo Scammarcio from John Wick 2) , this made me think that it could have been at least 30 mins shorter. The best scene for me is when Silvio, missing his days of selling real-estate cold calls a stranger to talk them into selling an apartment. It's electric. I gave it a three / five because it wasn't as engrossing as it could have been, the great scenes far number the pointless, boring ones but each scene / vignette is very long so if it's not hooking you, the film loses traction. Sorrentino is a great filmmaker, a visionary who creates visual spectacles - however, he was slightly off-game with this. This is more 'This Must Be The Place' than 'The Great Beauty' or 'Youth'....

Great fun, and gorgeous to watch - Loro review by BW

A (female) reviewer complained that this film catered exclusively for the male gaze - well, I'm male so that's a plus for me. It's my favourite Sorrentino film, and I suppose the girls are partly responsible - beautifully shot, stunningly beautiful, topless, and enjoying each other's company. I just can't imagine any Brit or American filmmaker making those 'girly' sequences anything like this stylishly. In fact, nowadays they wouldn't even dare try. You've got to hand it to the Italians. I just wish you could get hold of the longer version which was released as two films in Italian cinemas.