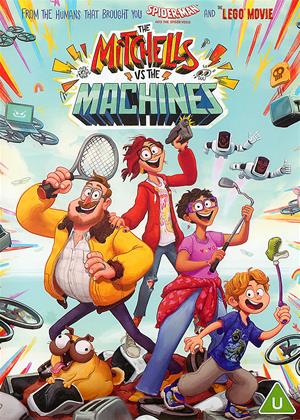 Reviews (2) of The Mitchells vs. the Machines

Great quirky film - The Mitchells vs. the Machines review by TH

For an animated film this was a decent watch. There are some good jokes and the story has a good pace.

Only downside I found was that It went down a rather obvious route towards the end and the voice overs didn't really get out besides Olivia Coleman.

Funny & Quirky Animation - The Mitchells vs. the Machines review by GI

A vibrant and quite funny animated adventure film that homages a load of other films (The Matrix, I Robot, Tron etc etc) but is ultimately a story about family and in particular about parents relationship with their teenage children. The weird and somewhat dysfunctional Mitchell family are struggling mainly due to the relationship between Dad (voice of Danny McBride) and teenage daughter Katie (voice of Abbi Jacobson), who is soon off to college. Dad tries too hard and yearns for the bond he used to have with Katie when she was a toddler. He's also hopeless with modern tech and hates the kids always being on their phones and laptops. As a way to reconnect he decides the family will have a road trip taking Katie to her college. She is horrified by this especially as she'll miss the first week of her new college. On the journey a big hi-tech company releases it's latest invention, domestic robots, but the program controlling then, PAL (voiced by Olivia Colman), takes control and decides to send all humans into space. Only the Mitchells stand in the way. There's plenty of big laughs to have here as the family join together to defeat the robots and in the process rediscover their family love. The film gets into the difficulty of modern family life and the generational gap whilst managing to be a funny rehash of all those sci-fi films you'll quickly recognise. Kids will love this and adults will have a great time too. Good family viewing.

The Mitchells vs. the Machines (aka Connected / Control, Alt, Escape!) review by Mark McPherson - Cinema Paradiso

Connected seems like a rather tired premise for an animated adventure. A society dependent on technology soon finds itself being attacked by rogue robots. It seemed like a script primed for that tired and mildly insincere declaration of how we should all spend less time on our phones. This message seems all but guaranteed based on the title. Thankfully, this stylish animated film manages to be far more than that and even makes a better case for technology, better condemning the corporate selfishness behind the products than the good of such devices of creativity and boundless knowledge.

The whole robot apocalypse angle is treated more like a setting than a central core of the story. This is hammered home with the stellar first act that establishes the quirky Mitchell family. We follow the film through the eyes of Katie, an eccentric teenager who has just completed high school and is looking forward to film school. She’s an extra-enthusiastic geek and creator of all things film, experimenting with everything from visuals effects to animation to puppets. Her relationship with her mother is good and a special bond with her brother who adores dinosaurs.

Her relationship with her father Rick, however, hasn’t grown well over the years. Being more of an outdoorsy type, Rick doesn’t look as highly on Katie’s future in filmmaking. He’d rather she learn fishing, hunting, and how to make a trap in the wild. They clash so much that Katie feels her taking off for college will feel like a release from prison. Realizing this may be the last time he has to spend with his daughter, Rick decides to take the whole family on one last road trip to escort Katie off to school.

The whole movie could have just been about the road trip without such sci-fi leanings considering the brilliant animation and loveable characters who resonate rather early in the script. Of course, since this is an animated film, there must be some manic. Thankfully, this element just about arrives as a shocking surprise when the trip suddenly turns into a fight for survival when evil robots start kidnapping humans. Naturally, the family has to find a way to bond fast as they become the only humans left on Earth who can prevent robots from taking over the planet.

Similar to how Sony’s animation studio developed Spider-Man: Into the Spiderverse, the animation style is wildly invented. The character designs have a great mixture of exaggerated features but also a surprising amount of detail. I especially dug every aspect of whimsically energized Katie, boasting everything from lightning-bolt earrings to black nail polish to drawings on her torn-up jeans to create monsters. The family’s adventure also has lots of filters and effects placed throughout, as though Katie jumped into the post-production chair and went wild with a Wacom tablet.

Connected has all the right stuff to as inventive and inspiring a film as it is a manic thrill-ride for kids who seek their animated comedies to be fast and punchy. The emotional core never feels tacked on at the end as the bond between Katie and Rick gets really somber really early. The referential humor is so on point that it’s almost unbelievable such a film would not only clap back against the notion that all technology is bad but even make dark jabs at the overreach of corporations who abuse that power. But even kids who won’t make such connections in the dialogue can still appreciate the absurdity of a giant Furby shooting lasers. As far as modern animated comedies aimed at the family, Connected is an all-around pleasing picture that will hopefully inspire future generations with its wild visuals, clever writing, and visual gags so brilliant you’ll have to rewind multiple times just to catch everything.