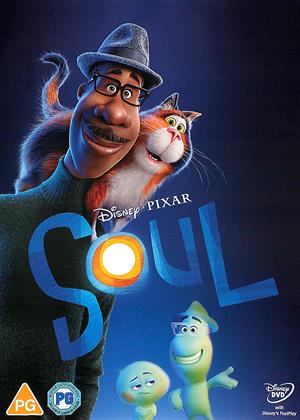 It was pure escapism for a very short while, really enjoyed this film and I'm a oldie. You think they can't get better, but they do.

Quasi-spiritual meandering comedy fantasy film, good in parts, with a great soundtrack and a fat cat - Soul review by PV

Things I liked about this film: 1) the impressive animation which we are used to from Pixar now. 2) The music, best original Oscar for a score by Trent Reznor of Nine Inch Nails amongst others. 3). The cat, though it is rather an empty vessel (and miraculously lacks a bottom). 4) some of the script which is genuinely witty.

Things I dislike: 1) the lack of warmth in the animation (think back to the simpler Dumbo, Sleeping Beauty, Pinocchio with Figaro the best animated cat ever!) and the way the piano playing scenes are so realistic they must be live action traced over digitally. The heaven/soul managers are pure 1950s animation too which is fun 2) the quasi-spiritual existential tricksy themes - common in many modern Hollywood films, all very self-focused and self-helpy; 3) the almost segregationist take on race with black only scenes and characters mostly (when no way would they were do white only). 4) the ending which drags on unnecessarily (no spoilers) as with so many overlong Hollywood movies now.

Some have claimed the themes are too adult for kids to enjoy and I can see younger kids being baffled at the fantasy soul segments. It is very like INSIDE OUT in many ways regarding that.

However, despite all this, I did enjoy the film, in part. Some scenes are beautifully especially when piano is being played. The moral and message is all self-helpy and icky as one has come to expect, of course.

The main character is winning too and I love the way they call him 'teach'.

Worth saying though that the black female sassy singer is a real stereotype - how many mor times are we going to see sassy black women in movies, and why is that stereotype NOT deemed offensive.

Maybe I am being too harsh - but I watched this yesterday evening and find that I have already forgotten most of the film, the contrived convoluted mock-heaven SOUL stuff especially which did make me roll my eyes.

Incredibly, the token white man in this is voiced by Graham Norton. Richard Ayoade also voices a character and there is a fun Kiwi manager too.

Beautiful in every way - Soul review by ATOMC

This is easily the best animation I've ever seen. Absolutely stunning on 4K Blu-ray. Probably not ideal for small children, but for older kids and adults, this is a must watch. Well done Pixar!

I enjoyed this film - for about 10 minutes. Then poor old Joe falls down the culvert in a busy street and lands in a place populated with dull little blobs who noodle around with life's big questions (sic) in sophomoric pseudo-philosophical style, none of which had as much to say about those things as one note in a Sidney Bechet solo.

A shame, as it was a great premise and Joe was an engaging character.

Just how far can a Pixar film go with touching on more adult subjects? In the past, they have proven they have a certain fearlessness when tackling everything from depression (Inside Out) to death (Coco). But Soul is more of a bittersweet animated film in how it tries to tap into something heavy about perceiving the other world of spirits, what it means to live, and what it means to die. And while this still makes for a pleasing picture that is leagues ahead of most animated films, it feels as though it’s a lesser film for pumping the brakes on something greater.

The story follows Joe (Jamie Foxx), a jazz artist who finds his pianist skills can only take him as far as a teaching gig. That gig is now going to transform into a full-time job with benefits and everything but Joe isn’t quite sure he’s willing to settle. He still pines for the stage and facing a classroom of reluctant band students has made him all the more desperate for finding anything to break out of his usual routine. He may just have that shot when the legendary jazz saxophonist Dorothea Williams (Angela Bassett) decides to take him on for one of their evening shows. All he needs to do is dress himself up and prepare for the night he’s been waiting years for.

It’s just unfortunate for Joe that he trips down a manhole and winds up dead. Desperate not to embrace the other side quite yet, he stumbles his way out of the great white light in the sky to find a way back to Earth. He may just find that escape when pretending to be part of the soul mentorship program, ushering raw souls to become ready for Earth with defined personalities. This will not be an easy ordeal as he’s paired up with soul #22 (Tina Fey), her designation implying she has been in such a place as early as the first souls sent to Earth. She’s a hard case student that just can’t be convinced life is worth living. The mismatched pair decide to work together, if still reluctant, to achieve what each one desires most.

Soul has a lot of the familiar Pixar elements. The animation is both decadent and experimental. Any scene that takes place in Joe’s reality is exaggerated yet brimming with details for a city during the fall season. Any scene in 22’s world of the supernatural features figures that seem to exist in multiple dimensions, both flat and round, curving from here to there as abstract shapes. There’s as much hilarious slapstick in Joe’s stumbling ways as there is emotional resonance for his personal journey.

The problem with such a film is that it feels more as though such a picture is pulling back from its full potential. These are some heavy themes of existentialism and defining what it means to be human as more than just focusing on one purpose for a meaning to it all. But such a theme is handled with a lightness that feels almost too light. This creates an unfortunate opposite-Goldilocks zone for the picture, being too adult in the story for kids but too airy in its contemplation to be adult.

That being said, there’s still quite a bit to like on a surface level. One of the most amazing sights of the film is a certain zone that harbors living souls who are either absorbed in their passion or have lost their lust for life. The inspired float in a Northern Lights wonders while the lost souls amble about a wasteland of sand. It’s a neat area even if it doesn’t feel as fully explored, especially for the confounding addition of meditators who can enter this realm as peacekeepers of sorts, trying to rescue the lost souls that are plagued with doubt.

While Soul has far more to offer than other animated films out there, it’s not quite up to the same standards as Pixar’s usual crop of bigger ideas. There’s a lot of unique elements here and yet it only feels half-explored for all its potential, always pulling back before ever getting too deep. Consider a scene where 22 tries to convince one of Joe’s reluctant students that the public education system is a joke that doesn’t warrant such worries for those trapped within its walls. Bold words but they’re treated more as a one-off joke, as though we weren’t supposed to suspect that such an aged soul as 22 could comprehend such topics. Her mindset more or less defines Soul, a film of great potential that never fully comes about.