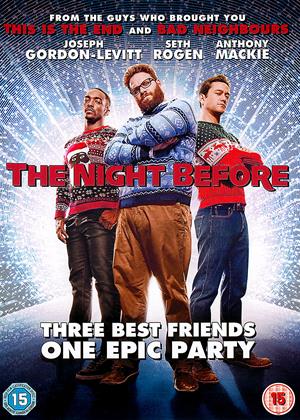 Reviews (1) of The Night Before

Nothing new but good fun - The Night Before review by PC

The plot, if there is one to talk of, is highly flimsy but there are moments which are extremely funny. Seth Rogan adds the laughs whilst Joseph Gordon -Levitt gives it heart.

The Night Before review by Mark McPherson - Cinema Paradiso

Will Seth Rogen ever escape the stoner movie trope? He’s getting a little old for this type of comedy. In The Night Before, he has a pregnant wife and decides to spend one last time having a wild night with his friends. This appears more like a bad habit of Rogen’s career path as if he’ll only do one more head movie before finding something better. But old habits die hard and this one may never go away.

The movie starts out with an innocent enough scenario. Ethan (Joseph Gordon-Levitt) is a man who had to deal with his parents being killed in a car crash on Christmas when he was young. Ever his buddies until the end, Isaac (Seth Rogen) and Chris (Andrew Mackie) create an annual tradition of hosting a boys night out every Christmas Eve. But time passes and the trio just don’t have as much time for one another. Rogen has a kid on the way and Mackie is becoming too famous. They decide to put an end to their tradition by having one last big night.

But the tenderness of brotherly love ends after that setup and the wild night begins. Some of this I expected. I foresaw the big limo that escorts them around New York City, the loud parties of booze, the acquisition of drugs, the blasphemy, the tripping visions, the blood and the puke. What I was hoping for as an optimist was that there would at least be some likability to it all. But most of what we see are stakes that don’t seem that high. Mackie’s character wants to score some weed so he can hang with the more popular crowd. Gordon-Levitt’s character has to work up the nerve to get back together with a girl. And Seth Rogen needs to find his missing phone that contains a video he doesn’t want his wife to see. If these guys don’t accomplish any of these things tonight, it won’t exactly ruin them, but it does serve as a cheap ploy to rekindle this already solid friendship.

But let’s back up for a moment to address the video that Rogen doesn’t want seen. In between the mushrooms and cocaine, slipped to him by his wife of all people, Rogen shoots a video of himself cursing out his unborn child. He eventually shows this video to his wife to clear the air and she laughs more than anything. Maybe I’ve become a bit of a prude, by I wouldn’t exactly be laughing at a video of my spouse aggressively attacking my yet-to-be-born child. My first reaction would be that this person needs to stop doing drugs, especially after he freaks out for being a jew in Christian church and pukes during a service. But we know Rogen’s character won’t stop doing them and that Rogen himself won’t stop making these movies.

In an attempt to be nostalgic, The Night Before attempts to satirize classic Christmas pictures in the worst ways possible. A Christmas Carol is woven in with a weed dealer that displays the past, present and future for those that smoke his product. A Christmas-hating woman does her best to embody her favorite Christmas baddies from The Grinch to The Sticky Bandits to Hans Gruber. There’s even an incredibly lame attempt by Rogen to duplicate the Kevin McCallister hands-on-the-face scream. Even the soundtrack attempts to duplicate that certain whimsically playful nature of farcical Christmas comedies.

Despite its lacking emotional resonance, that there are some scenes that are genuinely sweet. The trio decide to stop at Chris’ mother’s apartment to hangout and play Nintendo. When they accidentally wake up Chris’ mother, she’s delightfully surprised and shares a Christmas dinner with them. Even with the presence of Rogen having trippy visions and looking at male genitals on his phone, this scene is rather pleasing and a nice breath of fresh air before all the madcap bro-antics start up again. If only these moments weren’t minor decorations of the Christmas spirit, The Night Before could have actually been as charming as director Jonathan Levine’s previous comedy 50/50.

I suppose that given Rogen is 33 and I am 30, this is the type of raunchy Christmas movie that should play to my demographic. But I’ve reached a point my life where I’m over the nostalgic wonder of my youth, the infantile desire of longing to be a young party-goer and juvenile escape of refusing to face adulthood. If this R-rated stoner Christmas picture was intended by Rogen and company as a gift to my generation, I hope he kept the receipt.