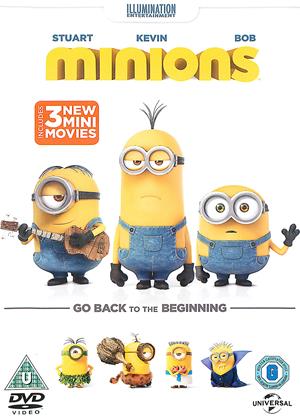 If there was anything that warranted a needless sequel like Despicable Me 2, it was the characters known as the minions. Squat and yellow with their nonsensical language, they existed as the mascots of those movies providing mostly dialogue-free humor in between the story. Now the wee banana-colored boys have spun-off into their own movie to take the centerstage they so rightfully deserved. But it’s a rather tall order given that the minions have been at their best in 3-5 minutes bursts of shorts. Given a feature length movie begs the question if such a gimmick is strong enough. For the most part, it manages to hold together a decent picture in its own wacky way.

We’re given more insight into the origins of these little guys. Beginning all the way back in the primordial age, the minions have been a race of followers. Any creature that is fearsome and evil they will follow to the ends of the Earth. Or at least up to the cliff that they accidentally drive him off of. The minions are apparently immortal as they walk the Earth for centuries trying to find a new master. They’ve become so dependent on finding the biggest fish to follow that not being commanded severely reduces their morale. The minions cannot exist on their own without anybody to lord over them for the sake of both the characters and the movie. Five minutes of just the minions bickering and playing off each other is amusing, but a feature length movie demands much more from the pint-sized masters of comedy.

Three minions - Kevin, Stuart and Bob - are tasked with finding a new master, leaving behind their clan to wait in a tundra society. Venturing into the New York City of 1968, our heroes once again find themselves easily amused by their new surroundings. Window shopping catches their fancy, taxi services prove dangerous and yellow fire hydrants appear quite attractive for asking out on dates. Are there female minions or do they asexually reproduce? A stranger question better left for the sequel perhaps.

Seeking someone new to follow, the three minions have incredible luck when they hear about a villain convention down in Florida. They hitch a ride across America with a sweet little family that turn out to be traveling criminals, on their way to the convention as well. They all have such great chemistry in how they evade the cops and bond over firing rocket launchers that I’m surprised this wasn’t the entire plot of the film. Of course, this cannot be since the minions require a more flawed villain to follow.

Their new master, Scarlet Overkill (Sandra Bullock), is a far cry from the lovable Gru in both tone and character. Her whole appeal? She’s a female supervillain. I wish there were more to her past her sinister smile and rocket-propelled dress, but there isn’t much else. Her motives are fairly standard with her greed for becoming royalty and a spoiled brat, but she just doesn’t have any memorable scenes. I can’t blame Bullock’s performance which never feels overdone. If anything, it’s played too safe. Animation voice-overs should encourage actors to go outside their comfort zone and embody a different character that is only reliant on their voice. And if you’re one of the few main characters with actual lines that are not incoherent babble, it’d probably be best to stand out - especially if you’re a female villain with an endless array of evil genius tech and a mad complex for crowns. Not much can be said for Jon Hamm as Overkill’s inventor husband that, while he does seamlessly throw himself into the role, never really steals a scene. I’ll give credit to the voice directors actually trying to get their talent to not sound as recognizable. I still can’t believe that was Jon Hamm's voice.

Retaining much of the same qualities of the two Despicable Me films, the best elements involve the minions and the faults lie in just about everything else. It’s always amusing watching the small little guys scurry about trying to save their kind and have fun. This time they’re even more fun now that there are three varying personalities to the yellow pills that they’re not all just delivering random or matching reactions. Outside of their antics, the film’s comedy is mostly focusing on satirizing the United Kingdom in bad Saturday morning cartoon fashion. London newsmen drone on in overly-charming dialogue, the Queen has a thick accent with exaggerated teeth and the logic of the country’s laws are mostly tossed out the window for the sake of comedy. All this stereotypical humor feels beneath the simple joy of the minions trying to steal a highly-guarded crown.

Yes, Minions is very cute, but no more than they ever were in the Despicable Me movies. It has all the same smile-worthy moments and just as many missteps in actual story. Though still a pleasing movie, it merely reinforces the belief that the minions are best served in doses as small as their height. Their sections of the film are hilarious shorts that could be viewed as such. They just need a far better story with more memorable characters to interact with. When that film comes, the minions will finally be at the height of their feature film potential rather than just being cute comedic anchors in otherwise lukewarm animated movies.