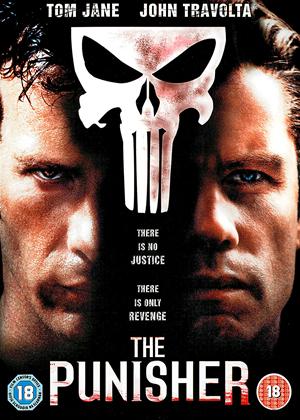 Reviews (2) of The Punisher

Punisher.....guilty as charged - The Punisher review by CP Customer

Hmmm now this is a tricky one folks. Brace yourselves although Travolta plays a great villain, and Thomas Jane is moody enough to carry the role off of Marvels anti hero, there's something that doesn't quite jell

True, nice set pieces, some great action and fight scenes but again something is lacking. I actually prefer the original movie that starred Dolph Lundgren which was made heck only knows how long ago.

Don't expect another X-Men, or Spiderman and you may not be too disappointed. It's not quite as disappointing as Elektra but doesn't stand up against Blade.

Okay but have seen better

Appalling. The first attempt at a Punisher film (with Dolph Lungren) is much cheaper and lacks the trademark t-shirt but is a more faithfull, comic book style rendition of this gun-toting Marvel vigilante.

This version is at times more like a Dynasty style soap opera than a revenge action movie. Frank Castle's war on crime is too local and limited and there is little sense of how bottomless his need to 'punish' the guilty is. Has anyone involved with the film read any of the comics? If so the lack of gun-based action and executions is baffling.

The three neighbours are a distraction that serve little in the way of adding any depth to the film or to Castle's character. The plot is uninspiring and at times embarassingly jerky and rushed.

For all it's comparative lack of budget, at least the earlier version had imaginative use of the Punisher's arsenal and well choreographed skirmishes in truly comic book in style. This is a horror of a film. That it avoided the straight to video sentence is a mystery. Avoid.