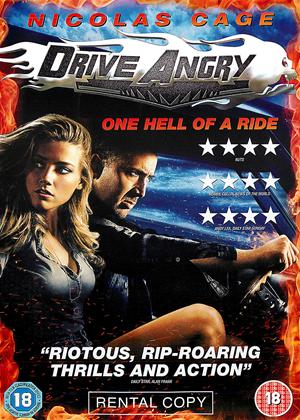 Synopsis:
Milton (Nicolas Cage) is a hardened - albeit dead - criminal who has broken out of Hell to stop a religious cult sacrificing his baby granddaughter. The police are in hot pursuit but they're the least of his worries - The Devil's none too pleased either and has sent the enigmatic emissary 'The Accountant' (William Fichtner) Aided by sassy waitress Piper (Amber Heard) and driving a series of smoking hot muscle-cars, Milton is Hell-bent on his mission and is breaking all the rules - but what are they gonna do, not let him back in?
Actors:
Nicolas Cage, Amber Heard, William Fichtner, Billy Burke, David Morse, Todd Farmer, Christa Campbell, Charlotte Ross, Tom Atkins, Jack McGee, Katy Mixon, Wanetah Walmsley, Robin McGee, Fabian C. Moreno, Edrick Browne, Marc Macaulay, Pruitt Taylor Vince, Julius Washington, Jamie Teer, Bryan Massey
Directors:
Patrick Lussier
Writers:
Todd Farmer, Patrick Lussier
Studio:
Lionsgate Films
Genres:
Action & Adventure, Thrillers

What makes anyone ‘Drive Angry’? For hell-dweller John Milton (Nicolas Cage), he’s got reasons. Already banished to Hell, he escapes when he learns that cult leader Jonah King (Billy Burke from ‘Twilight’ movies) who recently seduced Milton’s daughter to become a member, has killed her and her husband and is about to make a sacrifice out of Milton’s granddaughter for a Satanic ritual.

Of course, ol’ grampa won’t let this be. Together with a hot waitress with nothing to lose, Piper (Amber Heard), they drive angrily to Louisiana in her ’69 Charger. Along the way Milton is being chased by the man in black called The Accountant who is hell-bent on returning Milton to Hell. It seems Milton has every reason to drive angry, sure, but is it fair to make its audience angrier?

Nicolas Cage seems to be working on this ethos: Another bad movie, another paycheck. It’s been quite a while since he’s done a serious role – and the un-serious movies with him being too serious in it don’t count. So far, Cage is into campy fare but he does up the ante on ‘Drive Angry’ – it’s in 3-D this time. To say that ‘Drive Angry’ is ‘Gone in Sixty Seconds’ with TV’s ‘Supernatural’ tinge to it is partly accurate. If the movie was going for a cult classic feel, it misses the mark. The premise is interesting enough but laid to waste for the flimsy presentation.

Nicolas Cage is consistent on the heavy-handedness; if there’s something to be said for him starring in bad movies, he’s consistent. Billy Burke’s cult leader isn’t that evil-looking; more prissy modern-day magician. Amber Heard is only in it for the eye candy. But William Fichtner’s The Accountant is straight-up bad-ass. Fichtner is the only one who can go toe-to-toe with Cage. They’re great at doing hysterics but for some reason, Fichtner always has the upper-hand. You’re in awe of Fichtner’s commitment and just go ‘eww’ for Cage’s.

The cars are the real stars of ‘Drive Angry’; although, too bad because they’re mostly blown up in this trying hard B-movie.