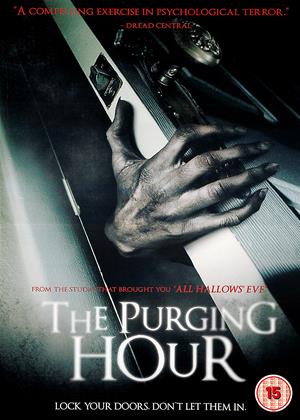 Reviews (2) of The Purging Hour

I wanted to watch a scary film, but the shaky camera technique used in most "found video" like this one, was so badly done that I just couldn't watch more than 15 minutes of it. My cat could have held a video camera better! Are we also supposed to believe that people use video cameras and not mobile phones now? Hardly. I'm not sure how it measured up as a horror film, but just watch Paranormal Activity instead. Much better.

This is a fairly enjoyable film. However, it is very strangely paced.

A family move into a house in an idyllic, if isolated, location. Overbearing dad Bruce (Steve Jacques), fractious mum Jennifer (Cara O’Brien), gobby teenage daughter Kacie (Alana Chester - and boyfriend Mark (Tomas Decurgez)) and sensitive younger son Manny (David Mendoza). They film themselves during their first few days in their new home, and this ‘found footage’ is interspersed with interviews with friends and authority figures telling what is essentially the same story. The doom-laden tone of their discourse jars with the scenes of family squabbles and normality. Worse, this style of presentation goes on for far, far too long without incident.

There are murmurs and whispers about the neighbouring un-named Californian town having some kind of murderous mystery, but this is rarely expanded upon. What we do find out is that the entire family disappear overnight – we are told this fairly early on (in fact, news of their disappearance is the first thing we see, presented as anecdotal information on screen). Now all ‘The Purging Hour’ has to do is go through the motions of killing everyone and providing some kind of explanation.

To this end, the final fifteen minutes of the film’s 77 minute running-time is suddenly a mass of breaking-up images (‘this battery is dying,’ providing the reason for that), screams, a bit of blood and death. Sadly, no real explanation, motive or reason is given.

Open-ended films have to be handled carefully, or the lack of closure is frustrating. Here, it is doubly so as we have invested so much time watching the family go about their business of arguing, laughing, unpacking, eating etc, the lack of cohesion in the subsequent pay-off we have waited too long for is annoying. Even with these things in mind, I quite enjoyed ‘The Purging Hour’ – the acting is good throughout and writer/director Emmanuel Giorgio Sandoval’s style is confident, if uneven.