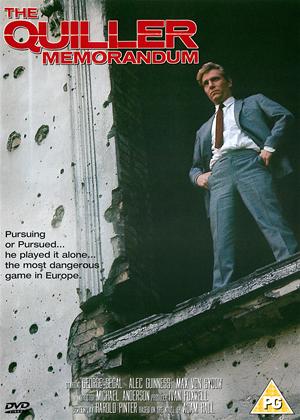 Reviews (1) of The Quiller Memorandum

Poor Quiller. Four years after James Bond hit the big screen, and one year after Michael Caine's considerably more realistic Harry Palmer gave us an alternative to Bond and the inevitable glut of Bond ripoffs and parodies, Quiller, who, by the way, is too butch to have a first name, tried to combine James Bond's glamour with Harry Palmer's realism. Bond is still with us, and Harry Palmer got a couple of sequels and might have had more if Ken Russell hadn't missed the point entirely and suffocated him under a mountain of the very silliness he was supposed to be an antidote to, but as for Quiller, his movie franchise began and ended with this film.

It's painfully obvious why. The acid test for an actor playing James Bond is whether you believe he would kill you, and George Segal's Quiller doesn't look ruthless enough to eat live yoghurt. Looks, of course, can be deceptive. In Quiller's case, they aren't. I couldn't shake the feeling that he'd only become a spy after being kicked out of a boy band for being too old. Segal's puppy-like "please love me!" demeanour seems more appropriate for a copycat Cliff Richard than a bootleg Bond. Though it could have been worse. Apparently the part was written for Charlton Heston.

Which brings me to the screenplay. Harold Pinter is a very good writer indeed, but no writer handles all genres equally well, and if you're familiar with Pinter's plays, you're probably wondering who in their right mind would hire him to script an action-packed spy thriller. The results were predicatably odd. To quote the IMDb, Pinter "...altered the emphasis of the book to be less a spy thriller and more a meditation on the human condition". Which John le Carré had already done in 1963 with "The Spy Who Came In From The Cold", filmed in 1965 with Richard Burton. Is there nobody Quiller isn't ripping off?

Not that it matters, since Pinter's weird take on the character is the most inadequate hero you'll ever see in any spy movie that isn't a spoof. It's true he eventually turns out to be slightly less of a fool than we thought, but, as in Robert Altman's bizarrely misjudged reimagining of "The Long Goodbye", this revelation comes so late that we don't believe it. By turns annoyingly cocky, hopelessly naïve and just plain inept, our half-baked hero provides the only suspense in the entire film when, having just gotten himself out of mortal danger, he puts himself straight back into it by mistake. The action is bordering on non-existent, the baddies aren't properly established to be a threat to anyone who isn't specifically trying to put them all in jail, several major plot points make no sense, and in the most memorable scene, Alec Guinness, who deserves far more screen time than he gets because he can act a darn sight better than the bouffant-haired Boy Wonder, explains the situation to our hero as if he's talking to a special needs child, using fairy cakes as visual aids. Seriously.

There's a shedload of talent involved in this movie, but it's underused, misapplied, or both. Harold Pinter's script throws the proverbial baby out with the bathwater and substitutes a Pinteresque scenario in which somebody who happens to be a spy wanders around looking confused and achieving very little, and where the movie's heart and soul ought to be there's an irritating fresh-faced simpleton who resembles a secret agent about as much as Burt Ward resembled a superhero. It's one of those films that tries to do something different because the people involved honestly think it's a good idea, but it isn't.