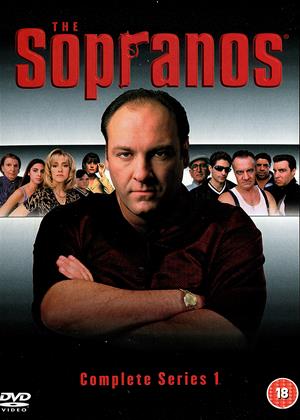 Reviews (2) of The Sopranos: Series 1

When 'The Sopranos' was first shown on TV (was it really 14 years ago?) I only caught a couple of episodes, mostly to see what kind of an actor Steve Van Zandt is [Aside: he's best known for being a long-time member of Bruce Springsteen's 'E Street Band']. And now I've finally caught up...

Whatever the competing merits, this is really great, compelling TV - tinged with some sadness by knowing that lead actor James Gandolfini died recently. From the opening sequence of scenes along the New Jersey Turnpike and the soundtrack music of Alabama 3's 'Woke Up This Morning', the somewhat bizarre scenario of an Italian-American mobster (Tony Soprano, played by James Gandolfini) visiting a psychiatrist to resolve his problems, the focus on Tony's friends / associates and his family rather than crimes and criminal investigation, this is a drama that turns the usual cop-focussed TV series on its head. And it works very well.

Despite the underlying casual violence of the life he leads, the assorted killings and beatings, the constant f-ing and blinding, we come to care more for Tony Soprano and his personal and family problems that we do about his criminal activities. Tony is clearly a shrewd operator when it comes to his 'business' dealings and the manipulative way he remains in control, but is unable to deal with his domineering mother and face up to the problems in his marriage. It also covers his relationship with his children, his sensitivity to psycho-sexual problems, and the role of Italian-Americans in US society. Now, does that sound like a typical gangster drama? Nope, didn't think so - and that's what made it unique in it's day, although others have since tried to follow.

Suffice to say that it works out in the end - but you'll have to sit through 13 episodes (well, the first one is the pilot (it says so on the subtitles) to see how this happens. I felt that the ending was a little rushed as if the loose ends were being too rapidly tied, but this was the only weak spot.

Excellent, compelling viewing. 5/5 stars. And I've even bought the soundtrack on CD...

I have to admit when this was first shown on channel 4 ten years ago I gave up after two episodes, expecting a 'Goodfellas' style mafia drama I was really disappointed. Ten years later, a bit wiser and now a firm fan of HBO dramas I decided to give 'The Sopranos' a second go and I'm glad I did. It's a clever show which shows modern day life in the mafia and the people and families connected to it. The first third of the season is a little shakey, the actors are finding their characters and the story is a little slow going though the show soon finds its feet and towards the end of the season it's pretty gripping stuff. The 4:3 picture quality of season one is a bit ropey especially when watching it on a large HD screen, though thankfully from season two onwards the show was shot in widescreen and HD. Looking forward to seeing season two.