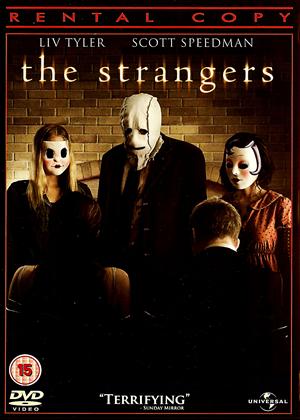 Reviews (4) of The Strangers

Having watched the trailer, I had really high hopes for this film. Unfortunately, they show the best bits in the trailer.

In fact, nothing much happens for about 1 hour, and I was tempted to turn it off at one point. But I solidered on and low and behold the creepy mask horror we had been promised in the trailer came to life. At this point it gets moderately better, and there are some really good 'jump out of your skin' moments but on the whole it is a huge antil climax to a very average and slow moving film.

Despite the beginning of the film telling us that it is based on a true story BUT no one knows what really happened and then taking Bertinos words at face value - he admitted that the idea came about from an experience he had as a kid when some one came to the door and asked for someone who wasn't there - then he heard about a number of burglaries in his area on houses that were unoccupied! The inspiration for the film he says comes from The Manson Family murders and that's it!

Film is aggonising on suspense.

Nothing much happens. Err, that's it… - The Strangers review by RP

Nothing much happens. Err, that's it…

If you're looking for suspense or drama then you won't find it here. No thrills, no terror, no horror - not anything other than boredom. OK, the finale is a knife attack - but that's about the only violence to be seen. And in the first half of the film nothing happens at all :(

It's not the worst film I've ever seen - there are much worse, far worse - but I want to send out a warning so you don't waste your time when you could be watching something so much better. 1/5 stars - give this one a miss.

watch it - The Strangers review by CP Customer

This film is quietly chlling, more so as is based on a true story. Starts a bit slowly but stay with it... you will not be disappointed. The only thing i would say is lets see another one maybe Strangers 2?

The ending isn't brilliant but lets the guys do a 2nd film...

Watch it and you will never answer the door at night again !!!!