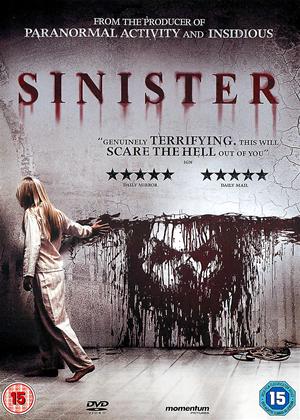 I enjoyed ‘Sinister 2’ so made the move to watch its prequel – to find I’d actually seen it before and had forgotten. I’m not sure what that says about me or the film. It doesn’t avoid what the sequel managed to avoid – the curse of the bratty kid. In fact, both children belonging to Ethan Hawke’s Ellison Oswalt are pretty obnoxious at times. As Bad Things happen, the children become more precocious. This is a difficult problem, and one that can actually ruin a film for me. Troubled children don’t have to be petulant, do they? Luckily, they don’t go on to play a huge part in the story.

Earning him the chagrin of the local constabulary, Oswalt moves into the house where previously, gruesome murders have taken place. Unfortunately, his wife and offspring are not told about this history. He has moved himself and the family here so he can research the horrific incidents for a book he is writing. He also finds an ally in Deputy ‘So & So’ (James Ransone), who is the one cast member to appear in the sequel.

‘Sinister’ is a fairly routine haunted house horror a couple of notches above the usual ‘family in peril’ fare, lifted by the performances of Hawke and Juliet Rylance as his English-but-American-speaking wife Tracy. It is somewhat overlong and slow-moving, but I don’t really have a problem with that. Oswalt trips down the familiar path of encroaching obsession and insanity, a descent sprinkled with the occasional ghost-faced child. The main villain, the gothic and spectral Bughuul, makes a fleeting appearance and is pretty menacing, making me wonder why the character isn’t used more.

I actually prefer the sequel. The production seems tighter and less traditional, as recompense for a lack of a ‘name’ lead. Both films have notable musical soundtracks; this deliciously dark OST is by Christopher Young.

I really enjoyed this movie - it had me hooked and jumping out of my skin in all the right places.

Gets a tad silly but all very well done. A bit predictable in act 3 to be honest but the ride was great.

Far better than most budget horrors.

But why oh why is the young boy have such long girly hair and why is he called 'Trevor'? I mean, 'Trevor'! If he were e 60 year old cock-er-ney maybe. Maybe it's an American thing. I'd recast that character and rename him.

The acting and plot are spot-on and the soundtrack is excellent too.