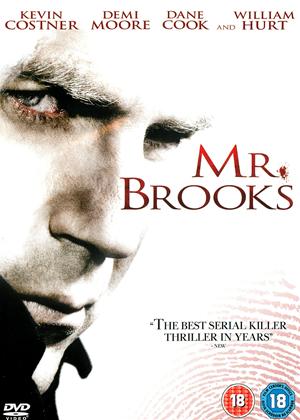 Costner shys away from his usual dramatic, slow-burning role and gives us an interesting view into the life of an ostensibly upstanding family man that just happens to be a serial killer on the side. Dane Cook isn't his predictable wacky self either, and actually helps give the film another dimension with his twisted comic and perverted view of serial killing. This film is surprisingly original for a modern Hollywood suspense Thriller and has plenty of plot twists to keep your attention and keep your thoroughly entertained on the edge of your seat till the final twist finale!

Jekyll and Hide for our time - Mr. Brooks review by CP Customer

The storyline is not very convincing, but still good entertainment, so here we have Kevin Costner with an addiction to kill - his inner voice is William Hurt - and a witness to a double murder. This sets the scene for a witty movie in spite of the gory theme.

I was surprised to see positive reviews about this film, I thought it was pretty much an average serial killer movie. The story was nothing special, the acting was wooden and the dialogue at times was downright laughable.

Watchable if you like the genre - Mr. Brooks review by RP

Kevin Costner is not one of my favourite actors - too wooden, with a strong and dislikeable accent - who struggles to play any part that requires subtlety. So he's pretty well cast here as a psychopathic serial killer :)

This is a moderately good film with sufficient blood and a few mild shocks and thrills - nothing too exciting though and certainly nothing to write home about.

The plot is straightforward, if a bit silly. Kostner plays Earl Brooks - the 'Mr Brooks' of the title - a successful businessman who has a secret side to him: he is a serial killer, indeed he is addicted to killing, and has an alter-ego (well played by William Hurt) who encourages him. But he is seen in his latest killing and is blackmailed into taking the witness along for the ride. So far, so good...

But this straightforward (?) scenario is then over-complicated by sub-plots including a multi-millionaire woman cop (Demi Moore) going through a messy divorce, a recently released violent killer whom she is attempting to track down, and the possibility that Mr Brooks' daughter has inherited his addiction to killing.

It's not bad - I quite enjoyed it - but it's not good either, and it's the sub-plots that spoil it, although the one involving his daughter does provide a cheap thrill near the end. Kostner is as wooden as ever, but here it doesn't matter too much and he's better than in many of his films. Demi Moore is poor and seems to be trying to prove something as a wannabe tough cop, complete with f-ing and blinding.

3/5 stars - pretty average stuff, but watchable if you like the genre.

At first this film is quite mellow but if you liked American Physcho then you will like this too. Made me laugh and also made me go 'uurgh'

Well worth a view . If you like a film thats a bit more intelligent than your average 'Serial Killer' movies then this is it