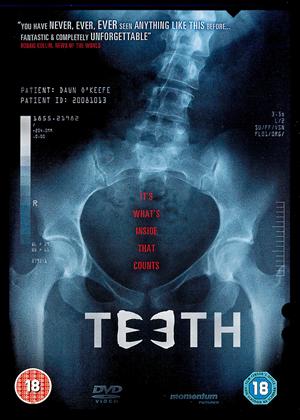 Nothing to get your teeth into - Teeth review by CP Customer

What an awful film! Of course I didnt expect film history in the making here, but I would at least would have liked to be able to catagorise the film.

I was under the impression that as the nature of the film is quite ridiculous, this might have been a bit of a send up like 'Saun of the Dead' - but I was sadly mistaken. The plot seems to try and take itself quite seriously, though the dismembered male genatailia bobbing around the floor following a chance encounter with scarey teeth girl was more than ridiculously comical!

I would advise any man to watch this, and women...well...just dont eat anything sausage like whilst watching this...if you must watch it at all.

omg what a load of crap, it was more of a comedy than a horror

The most stupidest film ever!! - Teeth review by CP Customer

This film is just a pointless film. It would of been good if it was comedy, but they was taking everything serious, and I think it was pretty ridiculous. I rated it 1 cause I had to, to be honest I wouldn't give it half. Just please dont waste your time and watch it, its pants! :)

Because the tone is set as a drama, the ensuing unfortunate events just caused me to laugh hysterically.

I'm assuming that the reviews that give this movie low scores because 'it would have been good if it were a comedy' have no sense of humour or are intrinsically incapable of enjoying a film because it is classed as something other than what it is.

Bored of teen slashers and mediocre monsters? Give this film a try.