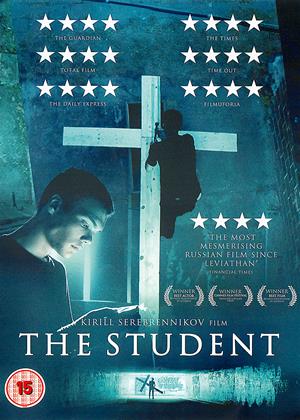 Synopsis:
Veniamin (Pyotr Skvortsov), a teenager in the midst of a mystical crisis, has his mother, schoolmates and entire high school turned upside down by his questions. - Can girls go to their swimming classes in bikinis? - Does sex education have a place in school? - Should the theory of evolution be taught as part of the Natural Sciences? The adults are soon overwhelmed by the certitudes of the youngster who swears only by Scripture. No one but Elena (Viktoriya Isakova), his biology teacher, will alone challenge him on his own ground.
Actors:
Viktoriya Isakova, Yuliya Aug, Pyotr Skvortsov, Aleksandra Revenko, Irina Rudniktskaya, Anton Vasilev, Aleksandr Gorchilin, Svetlana Bragarnik, Nikolay Roshchin
Directors:
Kirill Serebrennikov
Producers:
Yuriy Kozyrev, Diana Safarova, Ilya Stewart
Writers:
Kirill Serebrennikov, Marius von Mayenburg
Aka:
(M)uchenik
Studio:
Matchbox Films
Genres:
Comedy, Drama
Countries:
Russia, Comedy, Drama

Reviews (2) of The Student

Difficult to watch adapted play that is a thinly veiled attack on the Kremlin. Very Intense. It is well acted however. Bring your glasses if you don't speak Russian as the subtitles on the DVD are quite small.

This tense and occasionally farcical Russian story treads several anthropological, philosophical and moral fine lines ........ a teenage boy's angst and descent into an raging evangelical biblical madness (that at times threatens to tip the film into an abyss of schlock horror...well that's the jolly Old Testament for you.) This film also offers compelling reasons why you should never waste your time or money decorating a teenagers bedroom with flowery wallpaper, matching curtains and duvets.

The Student (aka (M)uchenik) review by Adrijan Arsovski - Cinema Paradiso

The Student (‘(M)uchenik’ in Russian) is directed by Kirill Serebrennikov and walks a thin line between an outright criticism of religion (mostly Christianity in all its forms and sub-sects) and embracing that same religion through sending an ambivalent message as the outcome of the film. The Student is based on the play "Martyr" (which the word Muchenik also means) by German author Marius von Mayenburg, whilst also being adapted to the projected bleak reality of contemporary Russian life. And so, is the film worth of ascribing any merit to it? Read on to find out.

In some way or another, The Student criticizes religion in a way that’s universal for all religious upbringings, with Orthodox Christianity serving at its forefront as is. And so, The Student ends up deliberately making its characters to quote parts from the Bible in order to depict that any idea, no matter how innocent and pure it may seem at first, can become the voice of zealots used to wiped their projected enemies – at that current period in the history of time. Or in other words: any religion can become aggressive towards those which it collectively deems as the enemies of the aforementioned religious group.

Especially true and striking is the idea of a possible iteration of the Bible into a human body, which is not a 100% original idea per se (the voice of God), but an interesting idea that needs a thorough analyzing to get to the bottom of it all.

Also, the film is very idiosyncratic in its tendencies, as at first it poses a really difficult question regarding religious fundamentalism; but then, instead of providing a clear-cut solution, The Student instead offers that same type of one-sided thinking (at least in the adapted screenplay) that strives for yielding to idealism without a cause, located in hopeless individuals with no sign of healthy reasoning or thinking.

Nonetheless, The Student does also provide audiences with another solution to this both moral and ethical dilemma: fundamental thinking can be overlooked in its initial form, but it may become too late when it grows into something much more than just an idea, a thought. The director makes this clear by projecting his ideas onto the main character and waiting on all else to decipher his tendencies as the narration goes on.

When it comes down to its technical details, The Student is a very competent film, featuring excellent camera work, good sound mixing, good angle shots, and everything that makes film a proper “film”. Good job there crew.

All things considered, The Student is worth your time at least for the idea it offers.