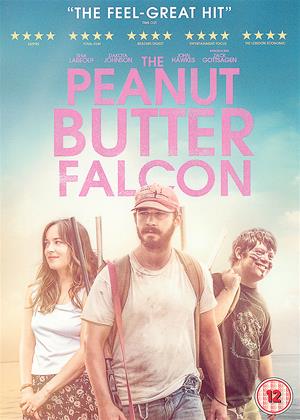 Reviews (4) of The Peanut Butter Falcon

I like ornithology but I don't like peanut butter, what did I think of this film.... - The Peanut Butter Falcon review by DS

The Peanut Butter Falcon show off its Georgia locations to beautiful artistic effect and just for this one fact the film should be watched. No harm is done by Shia LeBeouf and Zack Gottsagen’s non romantised and charismatic partnership during the run time. LeBeouf quite often a figure of fun in the press and amongst cinema goers once again comes up with the acting chops that is obvious he has. In less able hands this could easily have been mawkish and over-sentimental but Tyler is spikey, dishonest and hard to breakdown.

For the purposes of the story he has to breakdown but I found this change to be skilfully handled and gradually done to point that you do notice but the increments are judged just about right.

Throw in the rather lovely Dakota Johnson and you have a good trio to pull through the story. Well supported by baddies John Hawkes, in a role he is so good at, and Yelawolf, who looks the part, and drop in Thomas Haden Church with a small dash of veteran Bruce Dern and you have very strong and capable cast.

All that could really spoil the film is the story and overall it’s a strong and fun tale. There is a nice lack of sentimentality for most of the run, Downs Syndrome actor Zack Gottsagen makes sure that his Down Syndrome character is shown warts and all and he is a fully rounded character and the whole film is better for it. Once again in lesser hands this could have been bad – so bad. Luckily for us it wasn’t.

To drive the story to where we are going the writers have stretched credibility to snapping point and this is my biggest bugbear after the credits rolled. Just dialling back on the twee and happy ending and you have a great modern tale of the opposites helping each other, learning lessons and becoming better people due to this. The final wrestling scenes and very end section whilst not snapping that stretch for me it was just about the snap. The most frustrating part was with just some judicious editing of the writing, a rethink of the conclusion and the film could have been a modern road-trip classic.

Nevertheless the fantastic cinematography and impressive all round performances negate almost any minuses I could give this film. What a treat to see Mick Foley and Jake ‘the snake’ Roberts near the end, Roberts in particular has not had a great later life and was impressive as the slobbish, mean spirited Sam in his cameo.

As package The Peanut Butter Falcon is fine, fun, enjoyable yarn, it certainly is not without flaws which I feel could easily have been ironed during the early stages of making the film but who knows what the first vision was like before this came to our screens? It is easy to criticise with no prior knowledge and when all is considered you get a fun, uplifting story of love, redemption and backwater wrestling and Shia LeBeouf tearing it up again.

Just a nice easy going film. One of those for a miserable Sunday Afternoon.

A simple plot, funny, sometimes moving and of course somewhat predictable but very enjoyable all the same.

Super to see Zack, an Actual Down’s syndrome sufferer,Playing the part, Shia does a half decent job too, massive improvement on Transformers.

Unusual to cast a Downs Syndrome person in a movie but he is one of two central characters, so well done! A loner down and out small time thief needs to leave town to escape pursuing locals offended by his behaviour and collides with a Downs Syndrome boy who has escaped from an inappropriate institutional Incarceration. Queue comedy on the road theme. Along the way our thief meets girl and his perspective on life is given a chance to change, will he take it?

The boy has an ambition to meet a hero he watches on old videos. That will be journeys end or new beginnings? Watch and find out! An entertaining movie, heart warming and kind of informative about the syndrome and its victim.

The Falcon Strikes - The Peanut Butter Falcon review by AA

Charming film about a down's syndrome youth who for whatever reason is being cared for in an old peoples home.  He with the help of residents escapes from the home and with the help of Tyler, a small time crook who has upset the powerful owners on a fishing creek off Georgia, sets off to meet his wrestling hero who the dreams of emulating.  Chased by his carer the film covers a series of events, escapades etc as Tyler meets his hero and changes his life in the process.

There’s an almost throwback charm to the way The Peanut Butter Falcon plays itself so sweet for being so simple with its melodrama amid handicaps. It’s a film that tries to do right by finding a sense of comradery and warmth amid mismatched misfits who find each other. It comes branded with the best intentions of evoking cinema’s greatest power of empathy to make us feel more for humanity and place our lives in perspective. The only problem is that it does so through a mildly amusing play on the Rain Man formula, finding the touching tones clearly labeled in the paint-by-numbers manual of staging a road movie with a person of disability. All that being said, it’s hard to deny the appeal.

Shia LaBeouf plays Tyler, slipping in almost effortlessly to the role of a trouble-making outlaw. Similar to how he transformed himself within Honey Boy, LaBeouf’s character switches gears to find some meaning in his life on the waters with a fishing operation. Now enter Zak, a 22-year-old guy with down syndrome and a desire to wrestle professionally. It’s a prospect he feels can only be met if he makes a daring escape from his North Carolina living home. And with the help of Tyler, he may just find his way to happiness, as will Tyler.

Tyler, naturally, is posed as the hero who comes to the rescue of the unfortunate Zak, coming to his aid when bullies harass him. Through this act of realizing Tyler can’t leave such a man alone to his own adventure, they team up and set off downriver for their dreams. Of course, to avoid the mush of this story birthed from a plethora of tone-deaf TV-movies, the story must naturally contain an edge of quirk. And it’s this edge of bandits on the run that gives the picture its charisma that’s hard deny for its soft nature, accented by an air of adventure most rustic through roads and swamps.

Zak has great ambition and amazing comedic timing, finding just the right way to get what he wants, even if he has to take it upon himself to do so. You have to admit that spirit when he’s able to break out of confinement to make his dreams of attending a wrestling school come true. If he was able to break through those bars and escape under cover of darkness, you might as well let him do so. Of course, Tyler is a lovable enough rogue in his straight-faced nature that brings an honest understanding to the reluctant buddy of this tale. Even the addition of Dakota Johnson as Eleanor being the voice of mild reason is a welcome addition to top off the heart of the picture.

The Peanut Butter Falcon has it’s grand share of goofy moments, as when the duo encounter odd locals who make their adventure all the stranger. It fits neatly into the era of approaching this material with sincerity and bohemian warmth that has become so common that coming from the makers of Little Miss Sunshine carries little surprise. Though the formula is starting to wear thin on me, I must admit it’s a far cry from the abysmal usage of disabilities previously pushed into drama most uncomfortable for playing up a pity party. It used to be hard to avoid that pitfall in media but it’s welcoming now that it’s so easy to avoid that we can have middle-of-the-road pictures such as this which have more flaws in the conception of the story than its portrayal of down syndrome.