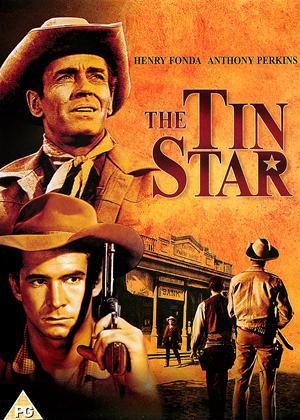 Reviews (2) of The Tin Star

Anthony Mann directed some of the best westerns of the fifties. Unfortunately this isn't one of them. Henry Fonda brings his trademark solemn intensity with a hint of desperation to the rôle of a hard man with a soft center, but he's given strangely little to do other than dispense sage advice to Anthony Perkins on how to be a better lawman (including that clichéd two-minute shooting lesson that somehow instantly turns the inept pupil into a master gunfighter), awkwardly romance a pretty widow with whom he has a conspicuous lack of screen chemistry, and spend far too much time being nice to a little boy who, like most child actors, can't act. If you build up the hero of a film to be a deadly and ruthless bounty hunter, the audience expects to see evidence of this, but we don't really, other than the dead body of some guy he shot before the movie started. Though given his unwillingness to dispense lethal violence, viewers could be forgiven for assuming he happened to find a dead outlaw lying around and thought he might as well claim the reward.

Anthony Perkins gives the same performance he always does. His twitchy man-child constantly reminded me of Private Pike from "Dad's Army" (the TV series, not the recent lousy movie); he's the kind of person who practices twirling his guns like a dime-novel gunslinger when he thinks no-one's watching, and inevitably drops them. He's also literally too stupid to live, and only escapes a pointless death that would have been entirely his own fault because the bad guy's a lousy shot. One of the few bits of on-screen violence in the movie is when Henry Fonda punches Anthony Perkins because he knows he'll get himself killed unless he's unconscious, but doesn't hit him hard enough and is very nearly proven right.

About that violence: westerns are an intrinsically violent genre. You expect a bit of shooting, especially when the hero is supposed to be somebody who kills outlaws for a living. But this film is extraordinary lacking in physical peril. Apart from one brief scene near the start which ends inconclusively, there's nothing resembling a proper action plot until halfway through the movie, and absolutely no genuine tension until the last few minutes. The one-dimensional bad guy, a vile racist bully with no redeeming features whatsoever, doesn't really do much except shoot some random extra in the back and sneer a lot, and secondary villain Lee Van Cleef is defeated far too easily. Of course, we know that Anthony Perkins will eventually man up and stop behaving like a little kid playing sheriff, and by putting into practice the things Henry Fonda has been telling him he'll triumph over that sneering bigot, but by the time he finally does this, we've been waiting an hour and a half and the film will be over in a couple of minutes. Anthony Mann was an excellent director, but he wasn't perfect, and this is very far from being his best work. In fact, it's rather dull. Try one of the Mann films starring James Stewart instead.

How to act - The Tin Star review by AB

Fonda gives a class in how to act cool, calm and collected - even his horse riding seems to be better than everyone else in the film. You know the story and how it will pan out but that doesn't detract from the film's overall ambience and who will get the just rewards, positive or negative.