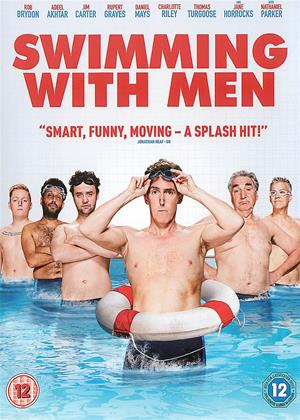 Reviews (5) of Swimming with Men

Funny, daft Brit-flick - like The Full Monty in water! Goes on too long though. - Swimming with Men review by PV

This film starts well - the first half hour is a joy. Typically British in that the Rob Bryden hero is a loser character - that just isn't an American thing, but more British than a cup of tea.

Like The Full Monty or Reggie Perrin in water then, with some well-known British actors starring and some great lines.

It does go on too long and has to force in a love angle, of course; the female trainer also gets very irritating.

But all in all, watchable and good clean fun! 3 stars.

Will have you smiling - Swimming with Men review by TB

I was so close to giving this film a four because it had me smiling throughout.

As has been said in other reviews; the film is literally the The Full Monty but in the swimming pool. All of the characters are excellent with their own personal stories that fit into why these misfits fitted together and rehabilitated each other. It’s a really enjoyable and fun film to watch.

What a strange film. Obviously not meant to be taken seriously but I didn't find it comedic. Dialogue humour was lacking and the situation comedy was uninspired. Not helped by discovering Rob Bryden has a previously unsuspected flair for portraying melancholy. Angst ridden tedium.

Abit ridiculous, but enjoyable - Swimming with Men review by AL

Taken in by the front over and remembering a little bit of Rob Brydon talking about this on the Graham Norton show. It was very daft, and at times unbelievably. But good innocent fun and the sort of film that could only be made in Britain. I wouldn't have gone to see this at a cinema, but on DVD totally happy way to spend only around 1.5 hours. And the shortish running time was appreciated.

Not one for the waterphobic. - Swimming with Men review by VE

A light hearted film with great soundtrack and some quirky shots. If you enjoy something which is a bit different with a feel good factor this is for you.