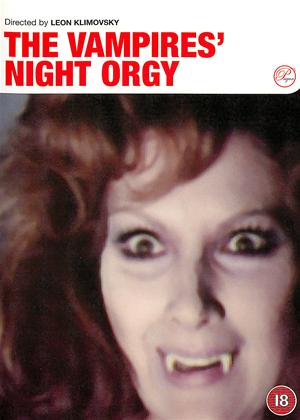 A bus full of travellers is heading for the town of Bojoni when the driver suffers a fatal heart attack, and the group is forced to stay in the deserted Tolnio village overnight. This and many other films begins with a similar premise.

The first element of note is that this features one of the worst horror film music soundtracks I have ever heard. For example, a scene of a little girl exploring ruined buildings with a small boy who may or may not be a ghost, has every ounce of atmosphere drained completely by this often tuneless jazzy music. It sounds like a pornography soundtrack and does its best, for the most part, to kill all the efforts of Diector León Klimovsky and his team stone dead. Many of the moments uninfected by this rotten score are very effective – although there are no orgies to speak of, the various vampire activities are pretty sinister when not swamped by inappropriate melodies.

Sadly, the whole project suffers because of this. It would otherwise be a fairly effective variation on the ‘Night of the Living Dead’ theme, with vampires replacing zombies. There are some good moments – the female vampire decomposing in the back of the car as Luis (Jack Taylor) and Alma (Dyanik Zurokowska) drive into the sun-set, and the afore-mentioned disappearing ghost-boy who accompanies young Violeta (Sarita Gill), for example. The locations are also very good, as films from this period often are – genuinely dilapidated buildings making haunting, ghostly panoramas proving to be very isolated backdrops.