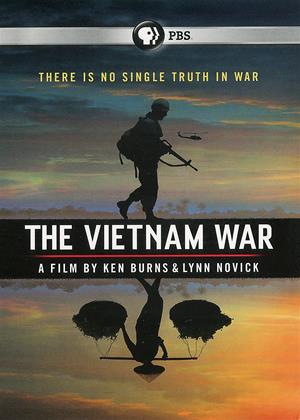 Sign up
Louis Theroux: The Strange and the Dangerous

Sign up
Top Gear: The Great Adventures 3: Romania and Bonneville

Reviews (2) of The Vietnam War

A superbly structured, balanced telling of a disastrous tragedy. - The Vietnam War review by AB

Over the years I have soaked up every film and documentary I could find on the subject of the Vietnam war, and I can say this series is by far the most profoundly complete I have seen. It uses insights from the individuals caught up in it - the Viet Cong & North Vietnamese Army, the US Military & South Vietnamese army, civilians from both sides, politicians and journalists alike, to explain, account and report from the early circumstances causing the build up and outbreak of the war through the fierce intensity at the height of the conflict to the final withdrawal and legacies.

It explores and reports the socio-political aspects, the strategies and technologies, the cultural contrasts of the belligerents and most of all the people fighting it. It gets across the absolute sacrificial determined tenacity of the north Vietnamese and Viet Cong people - hand made IEDs and mind boggling hard graft versus the richest most technically advanced, but often disillusioned, army in the world (not the last time this would happen). It covers every angle - it's the most complete and compelling telling of this tragic yet fascinating landmark in our history that I've come across.

If you have an interest in this significant piece of modern history -the first rock n roll war - which became an unmitigated disaster, this brilliant, powerful and compelling series is absolutely unmissable.

This series should be acclaimed as one of the most accurately told pieces of history one is every likely to possess as a historian, teacher, student or member of a family who has lost a loved one in this disastrously prosecuted war, from which it seemed impossible to extract the fighting forces. Like Afghanistan, the indigenous people fought a strike and withdraw strategy. Afghanistan has never been defeated in 6000 yrs and the North Vietnamese used a similar strategy, which denies technology that hoped for sweeping victory. There were no winners in Vietnam, just endless suffering by all sides.

The film's Director, Ken Burns, is one of the most acclaimed directors of our time. HIs understanding of film grammar excels to the point that his techniques are taught in film schools and colleges throughout the Western world. This is an exemplary piece of work that will doubtless be revered as the truest account on record. It is the creation of an extremely clever man and it must have taken years to research and complete, such is the passion of Ken Burns when undertaking a project.

Utterly gripping and brilliantly executed, this film will never be surpassed in the field of documentaries.