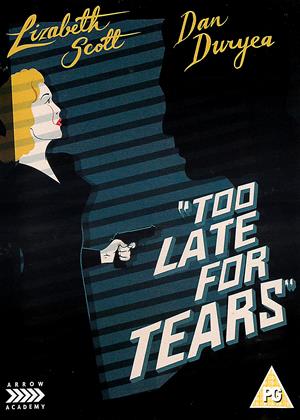 Reviews (1) of Too Late for Tears

“Don't ever change, Tiger - I couldn't take it if you had a heart.” So says Dan Dureya who, while living in a torrid bedsit, has pulled off a $60,000 blackmail case after learning of a local corruption racket. Trouble is that, in the opening moments of this 1949 film, that briefcase of greenbacks landed in another open-top car, one being driven through the hills outside Los Angeles by Arthur Kennedy - alongside is his sharp-tongued wife Lisabeth Scott.

She had not wanted to visit their smart friends who make her feel low at heel. And now, after their turning back and a chase by the money's “rightful” owner, the marriage is even edgier, she urging him not to hand over the money to the police. And striking up that necessary friendship which leads to the affectionate name of Tiger.

As if this were not enough, Kennedy's sister (Kristine Miller) lives across the hallway, and it is clear from the start that she, an equal tiger, does not approve of this wife, whose first husband had killed himself.

To get its main stars cost the studio a significant chunk of the budget, which meant that when it came time for the cameras to roll, much use was made of the same interiors; this adds to the intensity of a drama, which often has only two characters in a scene; even when others come along, the continued circling of one another takes, shall we say, interesting turns. Quite a lot happens by daylight but this is quintessential noir.

It is a surprise that neither its writer (Roy Huggins, from his novel) nor director (Byron Haskin) liked the finished film: each blamed the other, and they cannot have been pleased that, despite some good reviews, it did not get wide distribution. For many years it was out of circulation, available only in roughly-copied versions. Happily, it has recently been restored to decidedly smart effect - and, on disc, it comes with an extra which includes some comments by Dan Dureya's son, who recalls that, although he played an array of villains, off-screen he never shouted at anybody, “except his agent”.