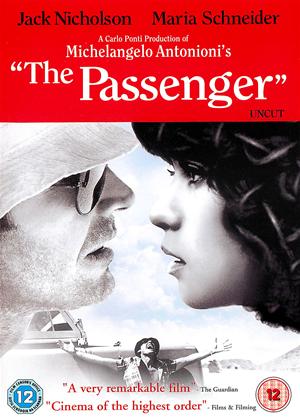 Reviews (2) of The Passenger

He's got a ticket to ride, and he don't care... - The Passenger review by Count Otto Black

To call this film a "thriller" is stretching the definition of the word to its limit. Although its basic plot - a man is mistaken for a different man and accidentally becomes involved in something extremely dangerous he doesn't at first know about, let alone understand - is the same as that of quite a few thrillers, "North By Northwest" for example, the title says it all. Jack Nicholson's character is a strangely passive protagonist who is literally along for the ride. It just happens to be somebody else's ride.

The film's major virtue is that it's extraordinarily well made. The scenery deserves to be credited as at least three-quarters of the cast, and Antonioni really knows how to make it perform. Even though architecture features heavily, he's never crass enough to give us a shot of Big Ben or Tower Bridge so we know we're in London, and scruffy little backstreets get the same loving attention as cathedrals. Antonioni also does an excellent job of persuading us that these characters inhabit a world where ordinary people are going about their business doing things that have absolutely nothing to do with the main characters and their adventures. When did you last see a Hollywood movie in which the Universe didn't revolve around the hero? This film cleverly plays with that idea by throwing in an enormous coincidence which our hero notices and gets a bit paranoid about, but which is actually meaningless and irrelevant.

Its major flaw is that, frankly, not a lot happens, and what does happen doesn't always make sense. Jack Nicholson, acting the way he could before he became an A-list megastar and descended into self-parody, is excellent as the reporter so world-weary that, given a chance to pretend to be dead and reinvent himself, he jumps at it before you can say "Reginald Perrin". But since he seems to be both emotionally and, nearly all of the time, geographically distant from the few remaining people in his life, there doesn't appear to be any good reason why he needs to go to such lengths to escape from very little other than a marriage that's obviously on the rocks anyway. "Escaping from himself" in the way that he does comes across as the kind of unrealistically symbolic thing characters in arty fiction do, and his acceptance of a destiny which all but the most naïve viewers will see coming a very long way in advance is even more unrealistic, especially in a movie that constantly shows us ordinary people getting on with their lives in a perfectly normal fashion.

This is a superb piece of pure film-making, but as a story, it doesn't have much substance. Oddly it's not boring, but I think that's mainly because it's so technically accomplished and beautifully shot. And I'm afraid that, although she's extraordinarily cute, Maria Shneider often appears to be having trouble acting and speaking English at the same time. It's arthouse cinema at its best, but for better or worse, probably a bit of both, it's very arthouse indeed.

Weak thriller with some interesting locations - The Passenger review by DR

This film has a star-studded cast but is short on dialogue. Why steal someone's identity and then complete their diary schedule, unless you want to be found out by their friends? The opening scenes seem to be shot in the Algerian Sahara or similar, in which there is a surprisingly clean French hotel staffed by locals who are quite sophisticated. Later locations are famous but less exotic. I would rate this as a B-movie.