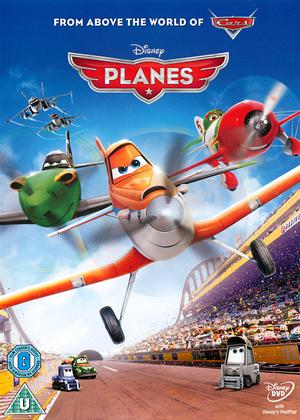 I was not sure what to expect as the film started as story line seemed to be soooo similar to that of cars which was a shame but with that in mind and trying to ignore that fact the film was very amusing. So much so my youngest son watched it five times before I had to return it. He does LOVE the film cars though

Usually there is a reason that films made directly for DVD stay that way, unfortunately Disney’s Planes was handpicked out of a selection of bargain bucket productions as the family behemoths next big animated feature. What follows is a 90 minute remake of Pixar’s cars but with, unsurprisingly, Planes.

The film follows Dusty Crophopper (Dane Cook) and his dreams of becoming a famous racer, something he just isn’t built for. However when he earns a position in a round the world race due to another players disqualification he finds himself among the best of the best fighting for first in a race that will test everything he has learnt from his teacher Skipper (Stacy Keach). The only slight wrinkle in this fine plan, Dusty is afraid of heights.

Even at some point the love of animation and some of the childish joy you find in films like the ones Planes is trying to be isn’t enough to make a film enjoyable. Planes is a slow, uninteresting disaster with a cast of characters made up of a fair few stereotypes and movie cliches. The film even throws in a luchador plane for good measure with all the Spanish stereotypical trimmings thrown in making for a fairly embarrassing hour and a half.

While the actual racing is fairly enjoyable to watch it proves to be one of the few moments of respite as all the scenes feel recycled and phony as the film doesn’t even try to develop a single original thought not developed by other animation studios.

Animation has brought about such amazing features and experiences from the surreal work of Miyazaki to the computer animated wonders of Pixar, Planes just attempts to emulate its predecessors by effectively stealing everything that made the originals original, just hoping that maybe nobody would notice.