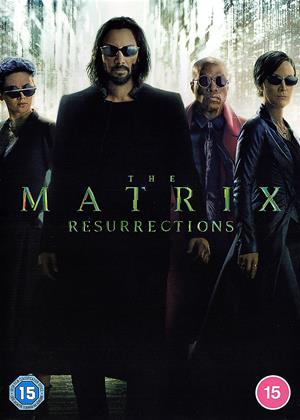 Reviews (2) of The Matrix Resurrections

Disaster of a sequel - The Matrix Resurrections review by Alphaville

This retread of the first Matrix film begins intriguingly with Keanu as a games-programmer who made the original trilogy, but this is merely a pretext for him to undergo the same plotline as the first film (unplugging from the matrix, meeting Morpheus, fighting Smith etc.). It’s full of talking heads swapping exposition and meaningless pseudo-babble. Someone tells Keanu, for instance, that Morpheus is ‘an algorithmic reflection of two forces that helped you become you.’ Yeah, right.

Keanu himself, looking as tired and disinterested as the viewer, sleepwalks through the film in a whisper. Surprisingly, the action is equally dull, simply repeating fisticuffs and shootings from the previous movies. There are even plentiful flashbacks to the earlier films as if to show us how much better they were. Who would have thought that a Matrix film could be so boring that you want to FF it?

Nostalgia but little else - The Matrix Resurrections review by SH

If your of a certain age and remember the original matrix being released you'll get a nostalgic whiff from M4 but apart from that the movie has little to offer. The original movie was groundbreaking. This is just the movie studio cashing in on past glories.

In a cinema landscape that has become flooded with nostalgic retreads, The Matrix Resurrections dares to question why it should be made. Commercially, we know why it was made. Warner Bros wanted to return to this franchise of bullet-time, leather, and a cyberpunk war of humanity versus machines. They were going to make this movie with or without Lana Wachowski. Thankfully, Lana agreed to direct and brought about what may be one of the boldest of sequels that aims to deconstruct its own world.

You can sense Lana’s desire for something different right from the first act. The film delves back into the simulation world of The Matrix but this time finds chosen one of Neo (Keanu Reeves) reduced back to being developer Tom Anderson. This Tom seems to be a successful game developer of a trilogy known as The Matrix. The parent company of his organization, Warner Bros, wants a sequel. And everyone chimes into the conversation to tell Tom what they think his trilogy was all about. Yeah, Lana’s not pulling her punches with this meta-commentary.

Tom is haunted by a past life he can’t fully remember. Shades of his life as Neo bleed through his mind and are kept at bay with medication, as the developer fears he’s losing his mind. Was he really Neo, he thinks? Within the narrative, we know he is. We not only see brief clips from the other films but the introduction lets us know that this is the same world of human-infiltrating runners and AI-programmed agents. Bugs is one of the latest runners, highlighted for her blue hair, stylish outfit, and white rabbit tattoo. The personality of Morpheus resides hidden in the programming of an agent, acting as a spy from the inside.

It’s only once Tom meets Tiffany (Carrie-Anne Moss) that some other vision of the past clouds his mind. Wasn’t she Trinity and didn’t they fight the machines together? It seems unlikely to Tom that they’d ever end up together considering that Tiffany is married. Yet a question remains for the audience of why these two characters came back to life and why. Both of them died during Matrix Revolutions so what purpose were they restored for? The answer plays well into the themes of enduring love, hope, and choice for humanity.

The film is one-part postmodern deconstruction and one-part societal questioning amid kick-butt action sequences. The criticism of The Matrix as a cultural phenomenon was a strong route to pursue. Consider how movie audiences tired of the appeal in the mid-2000s when it felt as though every action film had aped so hard off the look and feel of The Matrix. So many films duplicated the leather outfits, bullet-time effects, and wall-running thrills but few seemed to comprehend the greater context of what the film was saying. Even the premise of the red pill revealing truth was adopted by conservatives as an awakening to their politics, a notion that Lana has been quick to shoot down. It feels like she’s taking back ownership of her world and not letting it become a watered-down revival better built for selling merchandise than telling the story she wants to tell.

A possible downer maybe that Resurrections never has that redefining moment of action but that much seems on purpose. This picture is clearly about the bigger ideas of fighting back on a status quo that has been accepted with uncomfortable contentment. It’s not just about replicating the same old action moves. That being said, the many special effects sequences of guns, car chases, explosions, and punches that can break walls are still pretty stellar. There’s also mounting tension in how each fight increases the combatants. By the end of the picture, our heroes are fighting an entire city of opponents.

The Matrix Resurrections is sure to be a polarizing picture for how it goes meta and heavy on criticizing what everyone thinks the Matrix is supposed to be. As a film that deconstructs its legacy, which is an aspect you rarely see out of big studio sequels, I must admit that I found the film fascinating. And that’s worth far more than seeing revised bullet-time effects for 2.5 hours.