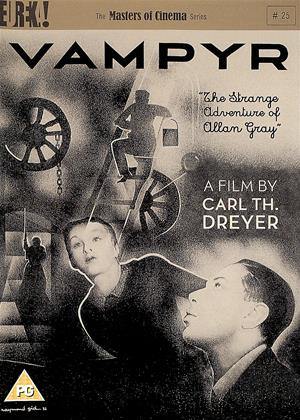 Although this is a sound movie, it's very much in the tradition of silent cinema. Perhaps due to synchronization problems in those early days, spoken dialogue is kept to a minimum, the more dramatic sound effects are unrelated to anything happening on screen, and plot exposition is done almost entirely through lengthy intertitles or shots of pages in an old book which conveniently explains everything. Which in its own way adds to the utterly bizarre atmosphere, since everybody wanders around observing extreme weirdness without saying very much. Like "The Cabinet Of Dr. Caligari", "Vampyr" feels the need to explain to the audience that these irrational events don't necessarily represent any kind of reality, and may take place entirely in the mind of a young man who has become obsessed with vampire folklore. And it's certainly true that nothing supernatural occurs until after our hero has awoken in the middle of the night, so maybe it's all a dream. Which gives the film absolute freedom to be as Surreal as it wants to be.

And Surreal it most certainly is! A young man who coincidentally looks extraordinarily like H. P. Lovecraft is given a package containing the old book which conveniently explains everything by a complete stranger for no reason at all. Various aspects of the plot are then cryptically revealed to him by shadows cast by nobody, some of which show time running backwards, and quite a few of which are having a party just because they can. At one point he obtains a vital clue by falling asleep and having a dream within the dream (containing by far his best scene) which may actually be some sort of out-of-body time-travel, since a crucial part of it comes true.

Throughout all this strangeness, everybody appears to be seriously stoned. The oddly passive hero, almost all of whose job is done by the elderly servant who could be bothered to read that crucial book up to the page explaining how you kill vampires, wins the love of a girl with a thousand-yard stare who speaks in a flat baby-doll voice, and comes across as a lot less healthy than her semi-vampirized sister, who almost steals the whole film in a scene where she has to do absolutely nothing except look feral, but does it so magnificently that I wished the movie had been entirely about her - we're talking "Exorcist" levels of scariness here! She's certainly a lot scarier than the vampire behind it all, who fans of vintage sci-fi will instantly recognize as William Hartnell's Doctor Who in drag.

It's very old, it makes no sense whatsoever, and it's peculiarly fascinating because it's in a class of its own. And at only 72 minutes, it would make a great double bill with "Nosferatu".

How to go about talking about Vampyr? This is a film that was made in 1932, but could almost be ten years older – it is mainly silent, with sparse moments of dialogue. Sometimes events seem deliberately obfuscated. There are also intertitles that relay moments and goings-on that might otherwise not be clear.

But little is clear. The main character is either referred to as David or Allen Gray. He is played by Julian West, who bears a resemblance to HP Lovecraft and is really named Nicolas de Gunzburg. The film’s critical mauling on release (after the more successful and ‘sophisticated ‘Dracula’ and ‘Frankenstein’, both 1931) caused Director Carl Dreyer to suffer a nervous breakdown. And yet what might he have expected? The picture is surely a deliberate exercise in weirdness.

It is an unrelenting cacophony of suffering, dying, silhouettes, grainy rooms, and creeping grotesques. Gray’s role is seemingly to wander through it, reacting to all that goes on around him. He is me, he is you and he is caught in a spiralling nightmare. That’s what this picture is – the most genuine depiction of a nightmare.

Played by Sybille Schmitz, the character of Léone’s apparent transformation into a vampire is eerily effective - simply a lowering of the eyebrows and the curl of an evil smile. This causes her sister, lovely Giséle (Rena Mandel) to elicit Gray’s help, and courtesy of a book called Vampyrs, he identifies her symptoms.

Gray himself appears to either be a ghost, or dreams he is a ghost, leading to another of the film’s frightening highlights. As a ghost, or an astral projection, he observes himself lying in a windowed coffin, apparently dead. We see him in the coffin staring up as other sinister observers peer in.

The eccentric doctor who has been observing proceedings comes to a horrible end, suffocated in a flour mill. Dreyer’s camera is preoccupied with this, and returns to his hopelessly flailing body and reaching hands long moments before he finally dies.

It isn’t always easy to stay glued to this because not only does it not really follow a pattern, but the style of weirdness gives no assurance that events are ever going to become any clearer. And yet the imagery rewards – the one-legged policeman, the inexplicable deformed old man, the scythe-wielding peasant (Death?) on a ramshackle boat, and Gray and Giselle scampering through the sepia summertime. It is horribly haunting and not easily forgotten.